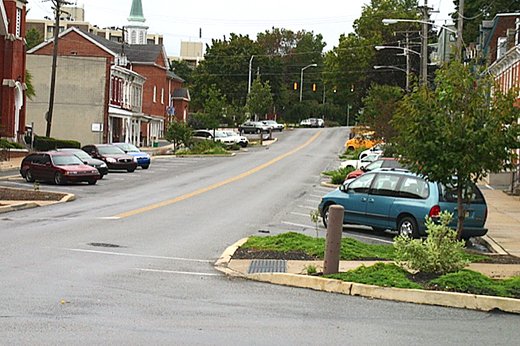 Pottstown has back-in angle parking on its main street, a source of controversy in that eastern Pennsylvania town. Someone pointed out that York has its own example of this seemingly unusual parking strategy – on Broad Street (above.) Thinking about it, patrons and vendors at the Farmers Market on Penn Street do the same. (Kind of, it’s just back straight in parking there.) Question: Why is this seemingly awkward parking approach in play on Broad Street and perhaps elsewhere around York County? Any other examples of this? Have you ever tried to park that way? Also of interest: North Broad Street’s Weaver Organ and Piano Co.: ‘Guaranteed to give permanent satisfaction’.

We love hearing from Betsy Baird, who asks good questions and provides glimpses from our past.

So here’s an email received late last night, if any can help: bambaird@verizon.net:

“Within the past week so, I thought I saw an article and picture of a farm, of years ago.  It was next to the western entrance of Rt. 30, near Pottery Hill.  It showed the farmhouse, farms, farmland, and above all, the quarry in back of it, slowly creeping onto the whole farm. Ensminger’s lived there.  My family and I knew them.

“I wanted to cut out the picture.  I had been on the farm.  Step by step, the quarry blew off dynamite closer to the farm.  The farmhouse shook when it happened! The Ensminger’s had to finally move out before they, too, were blown off!  They had sold the whole farm to the quarry and lived in the farmhouse, leasing the land to grow corn, wheat, etc. and live in the house as long as they dared!  At one time, before farm was sold, they had 100 cows!

“WAS there a picture of that farm in the papers?  If so, could you please give me the date it appeared?  That’s the only FULL picture I have of the farm!  I had told Joan about it, about a year ago when she was doing her blogs on the area.  Any help you could give me would be greatly appreciated.

“Have a good night’s sleep!

Arians in limelight: William Penn grad Bruce Arians is interim head coach of the NFL’s Indianapolis Colts. It’s rare for someone with York County links to gain such a position. Someone in the YDR newsroom mentioned that another is former Philadelphia Eagles coach Ed Khayat. For other William Penn grads who are performers on the big stage, check out the yorktownsquare.com York High achievers category.

Ancestry.com: That’s an important tool for genealogists. Now Guthrie Library patrons in Hanover can use this service. York County Heritage Trust library patrons also have assess to this service, which is costly to purchase individually.

Civil War Trails: Fairfield, the Adams County village that was the site of extensive troop movements in the Gettysburg campaign in 1863, is gaining a Civil War Trails marker.

Beyond the Bio: Bobby Simpson of Crispus Attucks Community Association and Susan Byrnes, namesake of the York health center, are featured in WITF’s Beyond the Bio video series.

Forum of the day: Some golf courses in York County are endangered, with Valley Green in Newberry Township  the most recently targeted for development:. But some people think new housing is needed around here. Do you care Valley Green, Hawk Lake and other such courses are used for other purposes? Background: Where was Outdoor Country Club first located?