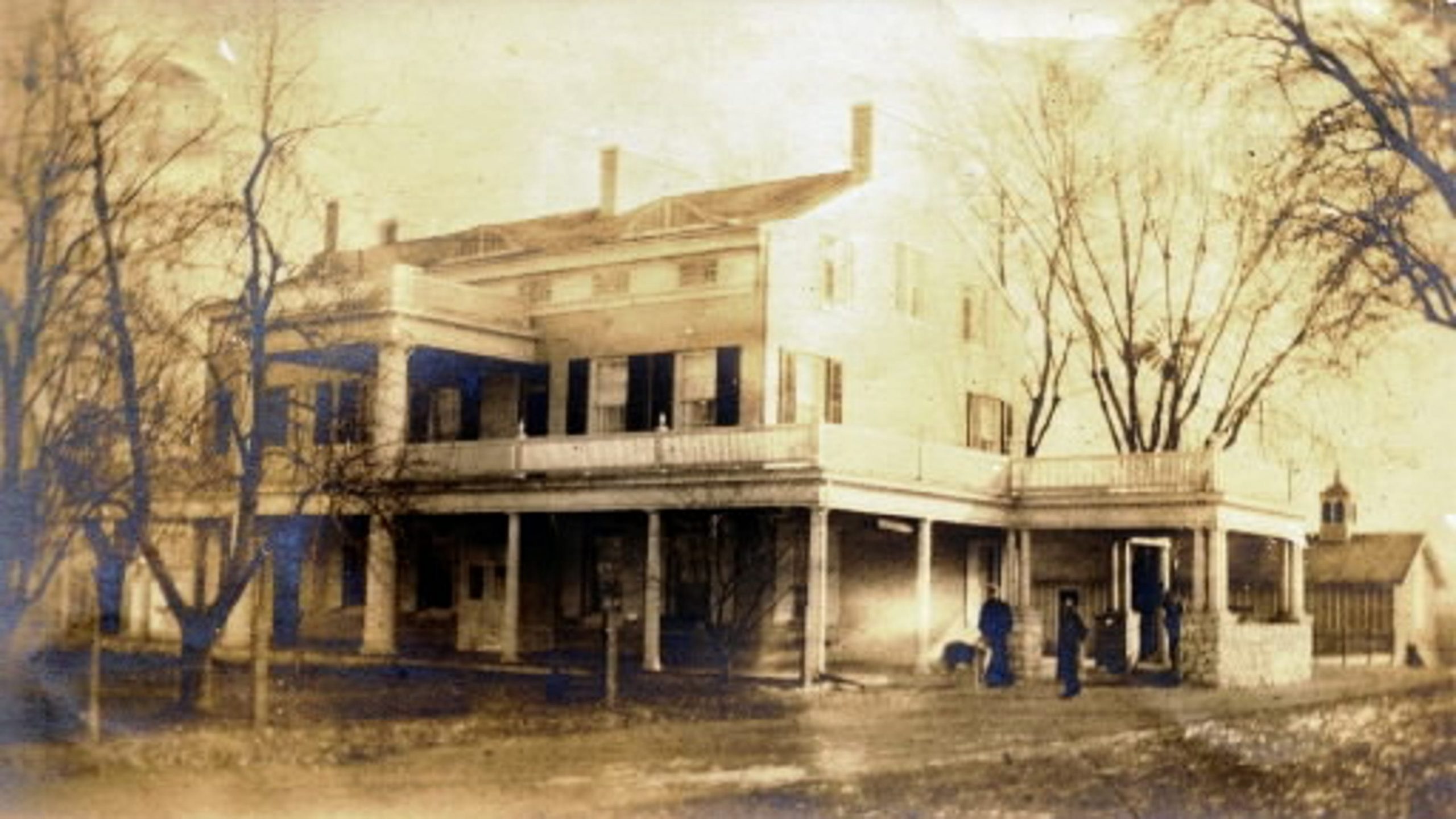 Robert Niess and his kinsmen are deeply interested in the Elmwood Mansion, even 65 years since it passed from his family’s hands.

Born in York, he is the grandson of the prominent J. Edgar Small family that lived there and heard many stories about this landmark from his mother, Ann Small Niess. He has visited it many times after it passed from owner to owner. Today, Elmwood House, as the family calls it, is owned by Inch & Co., a construction company that has remodeled it as home for its real estate and property management divisions.

Niess has another interest – a vocation, really – that draws him to the mansion. He’s a principal in Chestnutt-Niess architectural firm and longtime architectural faculty member and vice dean of the Peter Behrens School of Arts, both in Germany.

He recently took a moment to add science to a longtime question about the original location of the Spring Garden Township mansion, relocated to its current site via teams of mules and greased logs in 19o5. And he answered questions that I posed about the importance of the mansion architecturally and as a site with meaning in the Elmwood area and throughout the county.

He used Sanborn fire insurance maps along with current Google maps and came up with this result about the original location: The Elmwood farmhouse, built by Jacob Brillinger circa 1835, stood about 660 feet south from its current location. Its original site was near the southeast corner of Belmont Street and Second Avenue. That site with its barns and mill – a 1700s farm that predated the mansion – has disappeared under today’s “streets, houses and hospital grounds,” according to Niess. 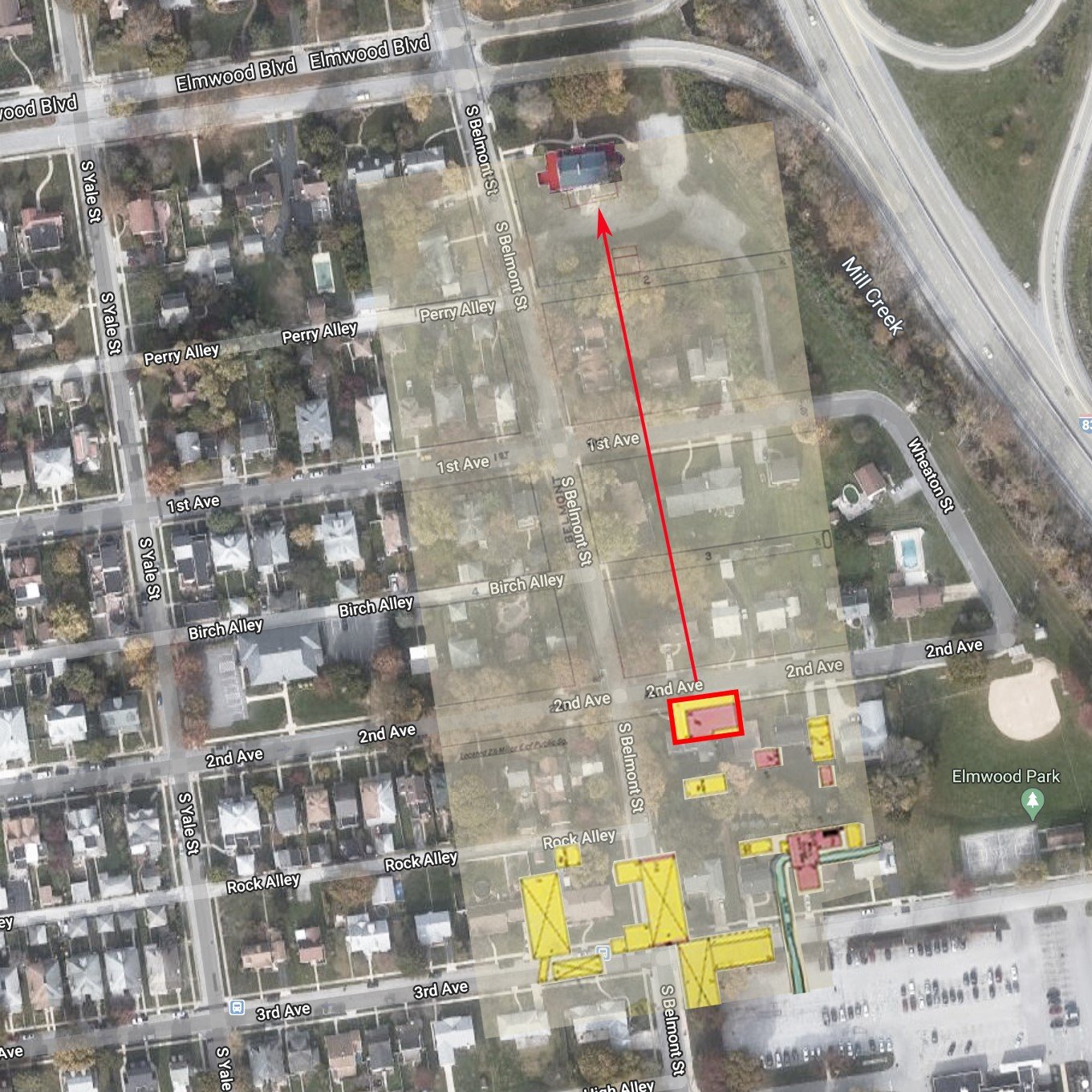 From architect Robert Niess, whose family owned Elmwood House or Mansion from 1887 until 1957: The Elmwood House was originally located 660 feet south of today’s location, 400 Elmwood Boulevard. The original location of Elmwood house, as built by Jacob Brillinger in circa 1835, was located at roughly today’s Second Avenue and was part of the older farm located at the end of what was called “Featherbed Lane.” He wrote: ‘Featherbed is … S Belmont St. The old farm, as shown here, is from the Sanborn Fire Insurance Map from 1894. In this map you can see the two large barns, the old mill and the old farmhouse etc. This 1894 map is overlaid on a Sanborn map from 1908 (after the move of 1905) showing the street layout for the new subdivision, including the new location of the Elmwood house and showing the barns and other building that were destroyed by the two fires. In 1951 the rest of the property of the old farm was sold and the buildings razed and the subdivision expanded.’ (Overall map by Robert Niess. Sanborn base maps provided by Bob Birmingham.)

Here are Robert Niess’s responses to my questions about Elmwood.

Q. What is your family’s connection to Elmwood House or Mansion?

A. My mother, Ann Small Niess (1923-2015), was born in York and grew up in the Elmwood House. It was always referred to as the Elmwood House, not mansion. The term mansion came into being with Memorial Hospital’s use.

The Small family is an old York family with roots that run back at least to the time of the American Revolution. The family owned several farms and later a lumber business, and the company Billmeyer & Small also made cars for the railroad.

Elmwood House was built circa 1835, by Jacob Brillinger who bought the old plantation which had been farmed since the 1760s. My great grandfather, John Henry Small, purchased the farm and house from Mr. Brillinger in 1887.

At that time, the big house was still part of a large working farm of 740 acres farmed by a tenant farmer. My mother’s father, J. Edgar Small, was a lawyer in York and grew up partially in Elmwood, and he and my grandmother occupied the house until 1957. After he died the house was too large for my grandmother, and she moved into an apartment downtown. The big house was sold, and many of the wonderful antiques were sold in a spectacular auction. In a sense, this was also the end of an era with a long development of success but also of struggle and change, all closely interwoven with the house.

Thus, Elmwood remained ingrained in our family’s identity, and I and my siblings grew up with many stories about the house and its rich history. Knowing the owners, we visited the house many times, and my mother wrote several pieces about the house including a “real” fiction novel in which the house and its history plays the centerpiece. When the hospital purchased Elmwood, her knowledge was much sought, and she helped out being concerned about the changes that were to be made.

Q. What is the significance of Elmwood to its landscape, neighborhood and York County?

A. York and its core urban organization was originally an agriculturally based city, surrounded by rich and rolling farmland. This tradition is still strong and present. A visit to the York Central Market will open your eyes (and taste buds) to this vibrant cultural heritage.

One of the many stories my mother related of her early childhood were the memories of the farms yearly slaughtering. The tenant farmer would ritually bring the choicest piece of meat to the house as a gift of the land and an honor to the animal and the season. At that time, Elmwood had already been moved, but the working farm still existed two blocks to the south with many farm buildings such as the tenant farmers house, a miller’s house, a large barn, corn and chicken sheds and a creamery. Jeffrey Bortner, who grew up in the miller´s house, did a wonderful sketch of the farm from memory showing the buildings and the farm’s older layout.

As mentioned in 1905, the big house was physically uprooted and moved to its present location. My mother believed it was because of fires to several farm buildings that were believed to be arson. But my sister and I have researched it further and now assume it might also be because of dwindling farm revenue and the need for an alternative income. At this time, the family divided part of the farm into a sub-division with new streets and plots for new homes. Since the house was moved only about 660 feet, it seems that it was not only located farther from the fire hazards of the farm buildings but also the house was placed in a more advantageous location for the land development.

But despite the property development and later the construction of the freeway, the grand old house remains one of the few houses of that era that is still capable of expressing its older relationship to the landscape and its agricultural basis. In a certain sense, the subdivision also tells a tale of hardships and struggle and the transition from a working farm in a changed economy. Through its ability to “speak,” I strongly feel that the house really belongs placed under historic preservation.

Q. What are your favorite architectural features of Elmwood?

A. When you see the house for the first time it obviously has something stately about it but at the same time conveys an almost iconographic sense of home. The big columns exude calm and stability, and the flowing front porch says “welcome.” This porch embraces the volume of the house, giving it a more intimate scale and its colonnade geometrically frames views of the landscape. It immediately slows you down and provides a noble sense of ease.

I think the stateliness comes not only from the colonnade but more from the intriguing proportion of the massive part of the house with its book-end chimneys. I find these gable chimneys unusual for a northern house, as they seem more typical of a southern antebellum mansion.

Without being noisy or fussy, there is a fascinating multitude of architectural features and spaces that are provided for on the exterior. You sense that people lived more with the outdoors. The entry steps, the long porch but also the big circular end porch are individual spaces that are all part of a whole. On the back side, I miss the old cut out porches that were filled in by the hospital, but I love the bay window and the large shuttered windows in general. The cast iron grating in the attic floor is exquisite, but my favorite part is the porte-cochère on the west end. With its welcoming covering and corners, framed by little bunched columns, it tells of the comings and goings of many visitors.

Inside, the main stair with its carved newel post and the colored leaded glass window on the landing form the centerpiece of the house, but I also love the spacious old kitchen with its secretive back stair.

Q. Is there anything else you think York County residents should know about the Elmwood Mansion?

A. Well I know that the many ghost stories are well known and popular, but they also seem to be truly interwoven into the house´s history. Many people have had “experiences,” and my mother spoke very frankly about “them.” She did not enjoy their presence, but she said that she and the family grew accustomed to their existence and accepted it as a part of living in the house. She felt that they stemmed from some unfortunate event, perhaps during the Civil War, as there were certain “feelings” as to a mode of dress worn by those appearing. One thing that in my mind needs to be researched is the possibility of an involvement with the Underground Railroad. My mother spoke of a concealment “box” her father uncovered in the old farmhouse and hiding places in the attic. The “box” was large enough to contain a person and had been closed up for years. When my grandfather opened it up, he found nothing more than a lovely and decorative but unfortunately empty tin box. He felt that it had been used as a safe spot to hide runaway slaves, and there were the family rumors of the wealthy bachelor, Jacob Brillinger who owned the house at that time and was an avid abolitionist.

I sincerely wish that the old house, with its new owners, can be treated and maintained inside and out as the historic monument it is.

The building and its site has a lot to tell and is clearly part of the identity of what makes York, York. The idea of a historic monument is, however, not only about preserving the authenticity of the past but allowing it to continue to address the present.