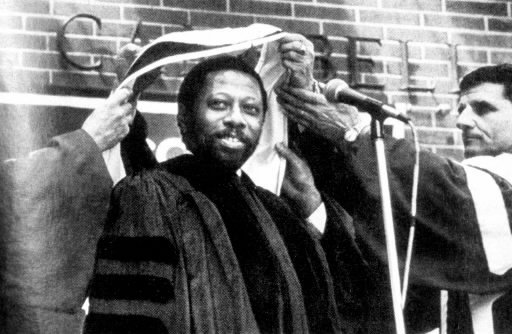 York College of Pennsylvania President Robert Iosue, right, leads a ceremony in which noted journalism Robert Maynard received an honorary degree. Maynard, whose journalism career in daily newspapering began at the The Gazette and Daily in York in the 1960s, went on to journalistic fame at the Washington Post and Oakland Tribune. Iosue, who recently wrote a book on the life and times of a college president, told a story about Bruce Springsteen’s visit to his campus in the early 1970s. Also of interest: Who was McKay of York College McKay Hall fame? and Journalist Robert Maynard tops among York Daily Record’s alumni.

So, the story goes – and it’s a true story – that Bruce Springsteen played York College in the early 1970s.

Former YCP President Robert Iosue told that story recently about “The Boss’s” appearance, which preceded his tenure there.

Springsteen performed before a small audience at the student union. This was obviously before he was known.

When Iosue heard the story years later, he commenced a search for the check paid to the entertainer.

He planned to enlarge the check, particularly the endorsement signature, and hang it on the wall of the student union. That building, interestingly, is named the Iosue Student Union today.

Iosue told this story at the time of the release of a new book “Fun and Games on Campus and How College Presidents Earn Their Big Dollars.” He will sign copies at Bookland, South Queen Street, York, at 10 a.m. to noon, Oct. 6, and 4-6 p.m., Oct. 10.

Back to Springsteen. Iosue’s thorough search uncovered no such check.

So here’s the question: Does anyone remember seeing The Boss’s performance in York? Or ever hear about it?