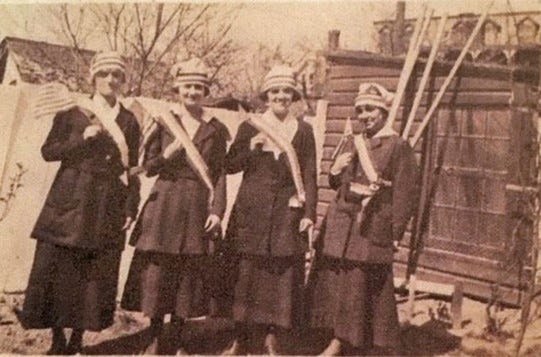 It’s right and proper to recognize the efforts by accomplished 21st-century women who are building on the civic work of countless other women leaders from the past.

First, here’s a sample from 2020 featuring women who often research, write or create art about women, among other topics:

-Central York senior Anna Lumsargis’ Girl Scout Gold Award project focuses on development of a digital site, with video, about notable county women from the 1700s to today. Similarly, in 2019, York County School of Technology teacher Kelsey Wisman developed an app as part of a master’s project about York city sites linked to the York race riots of 1968-69.

– Samantha Dorm, Tina Charles, Lisa Nelson and Jenny De Jesus Marshall of the Friends of Lebanon Cemetery are continuing restoration work on the historically Black North York cemetery. They then research and write about those buried there, including stories about scores of accomplished women.

– The York County History Center’s Year of the Woman featured staff-produced events, digital stories and in-person exhibits related to the suffrage movement and the many ways county women have worked to improve the community.

A highlight of this observance was the center’s production of a virtual exhibit, “Trailblazers,” that followed four county women on a cross-country journey in 1938.

– Jane Sutton, retired professor at Penn State York, wrote a story about a pioneering women’s rights activist, Frances Wright, in the first Journal of York County Heritage in 2010. She bookended that effort in the Journal in 2020 when she wrote a piece about opposition to the suffrage movement in 1915.

– Retired Lt. Col. Sandra L. Kearse-Stockton released her memoir, “480 Codorus Street,” this fall. Her work tells the story of her girlhood home in York’s Codorus Street neighborhood and then on to her career as a military nurse and officer.

– Rebecca Anstine, a respected community resource in genealogy, spreads her family history knowledge in her writing and presentations. She has written a Journal of York County Heritage article on Green Circle founder Gladys Rawlins and several other journal articles about Black cemeteries and Civil War veterans.

– Myra “Neicy” DeShields-Moulton is a popular speaker on African American family history topics in York County and beyond. She has been tracing her multicultural ancestors for more than 20 years and speaks about the genealogical tools she uses in her work.

– Lloyd, Joan Concilio and Jamie Kinsley write about all aspects of county history. Their collective work in searchable form counts in the thousands of posts on yorkblog.com. Lloyd, for example, has written extensively about Gamble and other suffragists. Kinsley is my partner in a new digital site, witnessingyork.com, whose topics include issues facing county women in history.

– Ophelia Chambliss unveiled an exhibit “Hidden Figures” in 2018, and most of those art pieces are on display at York College’s Center for Community Engagement. That exhibit and other pieces in her expansive portfolio explore women in history and the present.

– This year, Shelby Wormley, with colleague Richard Craighead, exhibited their powerful photo story  “Assemblage: A Photographic Representation of Black Togetherness” at the Center for Community Engagement. A representation of “Assemblage” was displayed at Penn Park, and artwork from the representation became part of a State Museum of Pennsylvania’s “Art of the State” exhibit.

Vaughn-Hall’s work in 2020 has included perspectives on being part of a family of law enforcement officers and rethinking as a Black woman the prospect of becoming a parent in an era of systemic racism.

-Logos Academy teens Arlette Morales and Tzipporah Goins organized a peaceful protest in the   aftermath of the George Floyd killing. Morales was recognized by the USA Today Network as one of 12 activists nationally who are seeding change in their communities. Vaughn-Hall wrote the story about Morales distributed on the national USA Today network.

-Two women with county ties received honors as among 10 Women of the Century in their respective states by the USA Today Network. Special Olympian Loretta Claiborne of York was recognized in Pennsylvania for her advocacy for people with disabilities. Dr. Leslie Erin Strausbaugh Strickler, a forensic pediatrician, received similar honors for her work in child abuse in New Mexico.

-A woman headed the Give Local York fundraising initiative in 2020 that far outpaced the previous year in community giving. In a time of great concern because of the pandemic, the Meagan Hess Given-led campaign raised $3.5 million for 305 county nonprofits.

– June Burk Lloyd has written extensively about women’s history on her Universal York blog and on other platforms. Here are her posts about women’s suffrage.

As a sample of June’s work, here are three quotes/posts about community leader Anna Dill Gamble:

-2020 accomplishments appear in this story on the Witnessing York digital site. This site, just launched in October, tells the stories of numerous women: 1800s activist Frances “Fanny” Wright, suffragist Anna Dill Gamble and others. More will be added.

*Caption for top picture: Carrie Munchel, left and Naomi Munchel, second from right, are among a quartet of suffragists in this picture, submitted by kinsman Brenda Neff.