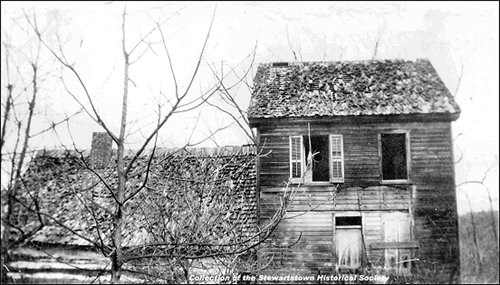 ‘Trials of Hex’ author J. Ross McGinnis will talk about the Hex murder at a Stewartstown Historical Society program at 7 p.m., Oct. 24. The program, at Stewartstown Presbyterian Church, is described as  a summary of the trials of the three assailants of suspected witch Nelson Rehmeyer. ‘It will also include a review of the actual murder that was a result of the notion of witchcraft.  During the trials, mysticism as old as the hills engulfed York County for weeks on end but out of it emerged a resurgence of the human spirit,” a historical society releases states. Intrigued? This photograph shows Rehmeyer Hollow house, standing today, in which the murders occurred. Also of interest: All Hex murder trial stories and photographs from the start.

Anytime Ross McGinnis speaks about the Hex Murder cases and trial of 1928-29, his audience is spellbound.

It’s not only the erudition of a trained trial lawyer that holds you. It’s the story itself: three young men attack and kill Nelson Rehmeyer in a remote southern York County farmhouse to break a spell the suspected witch cast on one of them.

In fact, even a description of the case from the back of Ross’s ‘Trials of Hex’ grab you and won’t let you go:

“Against a backdrop of superstition and mysticism as old as the hills of southern York County, a vagabond and two accomplices committed a murder that left in its wake issues for the community to be resolved that would be as intractable as the source of the demons that allegedly had caused the tragedy. The story is fact. It has all the essential ingredients of a fascinating tale of mysticism and the occult: a brutal, bloody murder done in the name of the ancient, primitive, and satanic power of witchcraft and superstition.

“The story of the murder still echoes and re-echoes with intensity and interest as a remarkable episode in the county’s past. It is compelling and fascinating—a blend of local customs, pow-wow, belief in the supernatural, and extreme violence. Its full impact cannot be understood apart from the trials, which provide the backdrop for an accurate analysis of the story. Without the trials, the story becomes the straight-forward recitation of a gory, violent murder. The trials add a broad dimension of absorbing personalities, local color, and community response to a unique and overwhelming event.”

The free program also may include the meeting of members of the families of Nelson Rehmeyer and John Blymire, one of the assailants. That, in itself, will make the trip to Stewartstown worthwhile.

Also of interest:
To see all Hex Murder posts/photos from the start, click here.
Or if you prefer, click on these individual links with their extensive collection of photographs:
Powwowing: ‘… It was here, and it had many adherents … , ‘Powwowing was done for good’, Hex headache cure: ‘Tame thou flesh and bone’, Relative: Evil in Hex murder came from outside, Hex murder fascinating tale of mysticism, occult: Part 1, ‘Trials of Hex’ makes sense of notorious murder case: Part 2 , Little-known facts about Hex murder trial emerge, Hex murder compared to O.J.’s, Anna Nicole Smith’s cases, Hex house visit offers surprises, Visiting the scene of the crime.