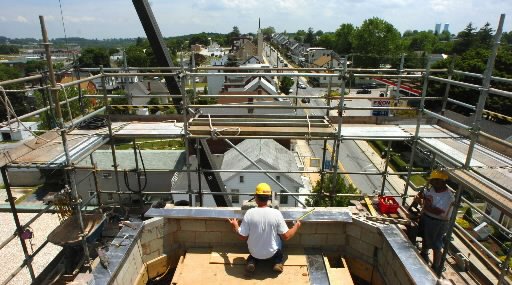 This is the view from atop Bethlehem United Methodist Church in Dallastown, Pa., several years ago when workers shored up about 15 feet of the 80-foot steeple on this 100-year-old church.Original deteriorating brownstones gave way to stones made from precast concrete. Far below and inside the building a Sunday school orchestra plays every week. Also of interest: Unsung mural on United Methodist Church in York preserved.

Sunday School orchestras have long been a fascinating rite of the Sabbath around York County.

These bands often play before and after the Sunday School hour, a reminder of the day when Sunday school attendance often exceeded the numbers attending church.

So in memory of these times, we dusted off a York Daily Record/Sunday News story from from Dec. 1, 2001, (excerpted here) that tells about this vestige from the past when live music rules and before recorded music played:

As his baton fell, the orchestra played a “Hail Columbia,” “Yankee Doodle” and a medley of patriotic songs, a Civil War song, a 1930s Broadway dance piece and “Chit Chat” – a Johann Strauss polka.

A few dozen older churchgoers chatted comfortably as the familiar music played on for half an hour before the start of Sunday school at Bethlehem United Methodist Church in Dallastown.

Some nodded their heads or tapped a foot in time to the music, enjoying what may be a disappearing local tradition.

In the early to mid-1900s, many Sunday school orchestras performed in York County. Churchgoers say that in the days before television and VCRs, church orchestras were a popular form of entertainment.

The Dallastown Sunday school orchestra, which includes some third-generation members, has performed at 9 a.m. Sundays at the close of the early church service since 1919.

The deeply lined face of the Rev. Robert Rettew, a retired minister, broke into a smile when he was asked about the orchestra.

He said he has enjoyed plenty of patriotic tunes played by the orches tra for at least 20 years.

“Wonderful way to start the day,” agreed church member George Jones, who was seated next to Rettew.

“That’s why we come early,” said Louise Strayer, who added that she has listened to the orchestra for 51 years.

Trumpet player Lynus Strayer, 60, is one in a long line of family members to play with the group. He has played in the orchestra 49 years.

The clarinet played by Strayer’s late grandfather, James, hangs mounted on a wooden plaque on the wall of the Sunday school room.

When Lynus Strayer was 11, he learned to play in the orchestra on a borrowed trumpet.

In the group’s early days, the church had brass, woodwind and percussion instruments for people who couldn’t afford to buy their own.

“In turn, you would return the service,” said Strayer, a Dallastown barber and a musician in the Spring Garden Band. “You would play in the orchestra.”

And play he did.

During a recent performance, Strayer executed a solo in “Tramp, Tramp, Tramp,” a Civil War song.

After a few bars, church member Joe Campanella whispered to Helen Strayer, in the chair beside him, “He’s a tremendous musician.”

Surviving orchestra members who have played the longest at the Dallastown church include Robert Flinchbaugh, who has played alto saxophone for 70 years, Mary Jane Campanella, who has 60 years on piano, and Gene Budesheim, with 50 years on percus sion.

Budesheim also plays with the Spring Garden Band and performed with the York Symphony Orchestra for 30 years.

Auen, a music teacher with Dallastown Area School District, was invited to lead the group after its second director, Robert Stably, died in 1998.

“I think the fact that I’m only the third director since 1919 is a special thing,” Auen said.

Over the years, the audience has aged, but the music has stayed largely the same.

“They don’t arrange music like that anymore,” Auen said. “We try to play music the people in the congregation would know.”

And though the room used to be filled with churchgoers on Sundays, nowadays, most seats are empty.

Auen fears that without young people in the group, the orchestra may someday end.

When Sunday school orchestras were common in the early 20th century, players started young. “When Mom and Dad said you had to be there, you were there,” Auen said. “Times have changed. Kids are so busy with other things.”

Sixty-nine-year-old Bill Hess was 8 when he learned to play the trumpet with the Sunday school orchestra at Christ Lutheran Church in Dallastown.

A church group was the only opportunity for many young people to learn to play an instrument back then, Hess said.

He became the director in 1965 at Christ Lutheran after his father, William Hess Sr., directed 25 years.

The group played less and less, and grew smaller, until it disbanded in the 1980s, Bill Hess said.

Hess cited declining church attendance and a different format for Sunday school as possible reasons for the loss of the orchestra.

Trinity United Methodist Church in York told a similar story about the decline of its Sunday school orchestra.

At one time, more than 1,000 people attended the Sunday school, said the Rev. Chuck McCulloh Jr., Trinity’s pastor. The orchestra, in its heyday, contained 60 members.

Although the church still has an old bass drum, clarinet and trombone, church attendance has decreased, and the congregation hasn’t had a Sunday school orchestra for years, McCulloh said.

Bill Ritz, who directs and plays in the Sunday school orchestra at St. Paul’s United Methodist Church in Red Lion, said it is a struggle to keep the group going. Only about a dozen musicians show up on a Sunday, Ritz said, and most are older than Ritz.

“I have a feeling our Sunday school orchestra will be gone some day,” he said. “The church isn’t growing anymore. The church is growing gray.”

And Ritz’s father, Richard, a trumpet player, directed after Emory.

With its passing, churchgoers such as 88-year-old Stanley Eberly will have only their memories of the musicians who played for the Sunday school.

Eberly played for 75 years with the orchestra at Bethlehem United Methodist Church, until he moved to a retirement center in New Oxford in 1989.

He learned to play when he was 11, after his family bought him an inexpensive violin from a catalog.

As an adult, he played despite a serious injury to his right arm. He had been hit by a mortar shell when he was a soldier in World War II.

“I thought I’d never be able to play violin again,” he said. “I can’t do the pizzicato like I used to do, but I thank God I can still play.”

Eberly recalls laughter and good times with the orchestra.

During a concert a few years ago, an aging clarinetist, now deceased, was growing hard of hearing and missed the title of one of the songs.

When the director called out the next song to play, the clarinetist announced he had already played it, drawing laughter from the group.

“So he played it twice,” Eberly said, chuckling. “Oh, we had a lot of fun times in the orchestra. Those were the solid, good days.”

In addition to Dallastown’s Bethlehem church, do orchestras play in any other Sunday Schools around York County today?

Billy Graham’s longtime song leader, George Beverly Shea, has died at age 104. People are discussing the man called Bev over at The Exchange. 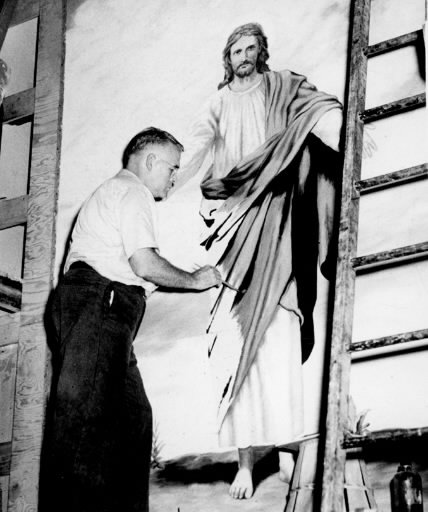