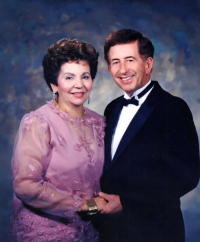 Dr. Edwin A. and Delma Rivera arrived in York, Pa., in 1962, as a pioneering Hispanic physician family. The couple saw the need for services – interpreters, housing, employment – for Hispanics in York. The York Spanish American Center emerged to address those needs. Also of interest: Delma Rivera profiled in AAUW’s ‘Legacies’ booklet.

José D. Colón-Bones, ambassador/past president and current board member of the Centro Hispano José Hernández in York, wrote about the center’s namesake in his initial guest column in the York Sunday News.

This column, he profiles Dr. Edwin and Delma Rivera, early Latino leaders in York County. That column (4/5/13) is run in its entirety here to add to the ” history of Hispanics in York County, Pa.:

As I mentioned on my first community column back in February, I will continue to provide information about the history of the founders of the York Spanish American Center (currently known as Centro Hispano José Hernandez). I realized that while doing my research that not only am I educating the Hispanic community and the York community as a whole about the first Hispanic pioneers here in York, I am also starting to build a friendship with some of the founders’ family members. This time we will learn about Dr. Edwin A. Rivera and his legacy.

Dr. Rivera was born on April 24, 1929 in the southwestern town of San German, Puerto Rico. Dr. Edwin Rivera and his wife Delma arrived in York from Puerto Rico in 1962 with their two daughters, Delma and Sandra. The following year, their son Edwin was born in York. Dr. Rivera was a staff member at York Hospital from 1962 until 1996. In addition, he had a private office located at 518 Madison Ave. He was a family practitioner for 38 years.

He served as a member of several boards of directors such as the American Cancer Society and the Spanish American Center. He was a member, deacon and elder at the First Presbyterian Church of York.

He had several hobbies such as photography, painting, dancing and woodworking. But the biggest hobby of Dr. Rivera was being a dedicated doctor to his patients, especially the ones that encountered language barriers. Being a physician, father and grandfather were the greatest achievements of his life.

As the first Hispanic physicians in York, he and his wife began to see the need for services for this segment of our community, such as interpreters at York Hospital, help with housing, employment and issues with Hispanic students within York City School District.

They formed a group of local Hispanics interested in helping their community and founded the first York Spanish American Center on Queen Street. It became the hub for the Latino community in York and was also a United Way Agency.

After many years at the Queen Street location, they outgrew this site and the Spanish American Center moved to a building at East Philadelphia Street.

Their son, Eddie, completed his Eagle Scout award project renovating the board room at the new center.

Dr. and Mrs. Rivera were honored with many civic and community awards over the span of three decades. Mrs. Rivera also served on the Governor’s Council for Latino Affairs and received a special invitation to the White House while she served on this board. She received a distinguished award being listed in the book “Legacies of York” in 1980, being honored for her civic and humanitarian work in the York community.

Dr. Rivera passed away on April 15, 2006, in Baltimore. That very same date happens to be Mrs. Rivera’s birthday.

The legacy that Dr. and Mrs. Rivera instilled with community service not only to Hispanics, but anyone in need, has continued with their grandchildren. For example, their granddaughter, Maria Lytle, has been involved in community activities (sharing her vocal and musical talents), and has participated in events such as the Race Against Racism and sharing her Latina culture at multi-cultural programs.

Many local individuals in our community are very well involved in the Hispanic’s affairs due to the precedent and examples set by Dr. Rivera and his wife Delma, along with her cousin, the late Mr. José Hernandez (the York Hispanic Center carries his name). That would include individuals such as members of the Board of Directors of the Hispanic Center who have been working diligently to keep not just the dream alive, but also keeping the doors opened at the center.