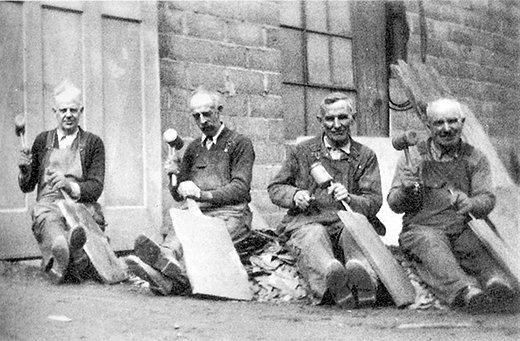 In the mold of these craftsmen, Roger Wilson will demo the practice of slate splitting (say that fast three times) at a Stewartstown (Pa.) Historical Society demonstration on May 8. Wilson will talk about the Welsh and their slate quarrying in the Delta-Peach Bottom area of York County in the 19th century. Also of interest: Check out these stories and photographs on the Welsh in York County, in full or in part.

Dr. Roger  Wilson, coauthor of the authoritative book on southeastern York County slate mining “The River and the Ridge,” will present show how to make roofing shingles from slate at a 7 p.m., May 8, Stewartstown Historical Society meeting.

Roger Wilson has demonstrated this technique for several years.

Wilson’s book is an interesting look at that corner of York County and also covers an often overlooked part of mining in that area – the green marble industry of Cardiff, Md.

Robert L. Jones was one of several slate companies that operated in the Delta area.

Camp Security artifacts: Come by the York County Heritage Trust today to see a display of Camp Security items. It’s part of fundraising efforts to pay for the site of the British POW facility in the American Revolution.

Landmark remains landmark: The Hoke House property, the landmark house greeting motorists coming into Spring Grove from the north, will remain standing. Rutter’s, has no immediate plans for the house. Preservationists fear the house is being eyed for demolition.

A sense of discovery: Baltimore media have discovered York. Check out: Take a trip to York, Pa.