Old road motels are fascinating. Actually, the now-demolished Rocky Ridge at the Glen Rock exit of Interstate 83 was a new road motel, built for I-83, which opened in 1959.  But in recent years, it looked like an old road motel compared to the huge chains going up along the interstate in the past 10 years. Rutter’s bought the motel and land recently for possible use as a convenience store in the future. Glen Rock’s interchange is one of the few exits along Interstate 83 without a Rutter’s. This 1969 photograph comes from Bob Ketenheim’s book, ‘Images of America: Around Glen Rock.’ A ydr.com story about the Rocky Ridge captured the scene: ‘It was, in its day, a landmark of sorts, sitting back along Seaks Run Road in full view of motorists on the highway.’ (See interior view of one of its rooms below.) Also of interest: Besser’s, always open on the Susquehanna Trail, served as welcome stop for motorists.

Love it when small towns around here gather their artifacts and put them on display. York Springs in eastern Adams County is the most recent town to open a museum.

York Springs was a resort town in the 1800s. The York Sulphur Springs spa drew visitors from all over.

So the local history group, the Ye Olde Sulphur Spa Historical Society, took its name from that resort. Now it has a museum, as the Hanover Evening Sun explained in a recent story: York Springs putting history on display.

The museum will operate at 408 Main St. The society is hosting an open house on Oct. 7.

“The society wanted to one day have a museum,” a spokesman told the Hanover Evening Sun. “It’s been a longtime endeavor.” 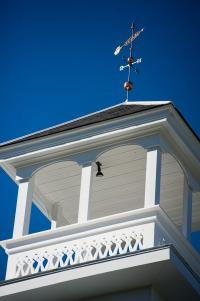 Seems like many York County churches  – St. John (Sadlers) Lutheran Church in Hopewell Township – are nipping and tucking their bell towers and steeples: Do you have a favorite church steeple in the region that you can’t keep from admiring? Please comment below.

From the archives: Steve Stetler political corruption case is a trial history will remember. Updating with comment: Steve Stetler deserves work release as part of his recent sentencing. If so and assigned to the Dauphin County Jail, maybe he could devote his fiscal acumen to healing Harrisburg City’s beleaguered financial books.

Forum of the day: Bacon and other pork-products could be in short supply because of drought conditions: If such shortages occur – sometimes called Aporkalypse – will you miss these on your dinner table? Background: Here’s a time-tested York County hog maw recipe. 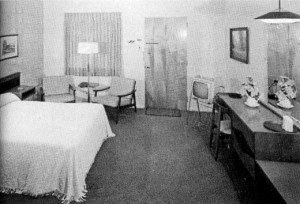 A Springfield Township spokesman said the Rocky Ridge was  last owned by Dong and Chaie Kim since 1991. Here’s a view from Bob Ketenheim’s book of one of the Rocky Ridge’s rooms in 1969. It was then operated by Ruby and Allen Myers. “The motel advertised that it offered 18 modern units with a scenic view, wall-to-wall carpet, tile bath, television and air conditioning,” a caption states.