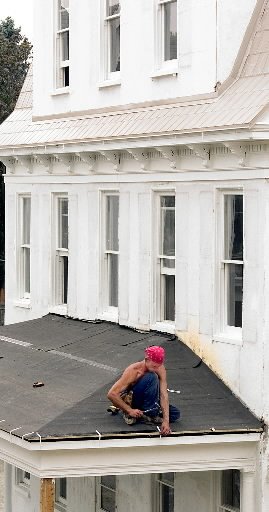 This shows Memorial Hospital’s predecessor, West Side Osteopathic Hospital (and before that West Side Sanitarium) in 2004. By then – 40 years after the hospital moved to the east side – the old complex was being remodeled into residences. Background posts: East side Memorial Hospital formerly on west side and Elmwood Mansion book more than history of a house.

Memorial Hospital’s flirtation with West Manchester Township’s former Hawk Lake golf course as a new site means that the hospital and its predecessors are covering most points on the compass.
The exception is anything south, where York Hospital and its affiliated Apple Hill reign… .

Memorial formed from West Side Osteopathic Hospital in West York, right next to the York Fairgrounds.
In 1962, it dedicated a new campus on the East Side, leaving its west side buildings to eventually evolve from Thompson Business College into apartments.
If the hospital locates on the Hawk Lake site, in full or in part, the decision also points to two other York-area trends.
Hospitals and health care providers continue to be in an expansion mode, constantly building, renovating or opening new mega-offices. Just look at the growth of the Apple Hill complex as evidence of that.
And the area’s plentiful golf courses, that caused York County to tout itself as the Golf Capital of the America in the 1990s, are worth more to developers than as 18-hole fairways and greens.
Which brings us to a story about the first day of the move from west side to east side – 46 years ago today.
Ruth Kammer writes that despite the contractor’s best efforts to clean the new east side facility, construction dust was everywhere.
“The big push broom used by Dr. (Roy O.) Kammer (her husband) and the other thirty-nine staff physicians to sweep through the rooms the night before the ‘move’ became a hospital memento and was retired to the Kammer Carriage House.”
For additional posts on the Memorial Hospital-owned Elmwood Mansion, see:
– ‘… A shadowy figure of a hoop-skirted woman…’
– In new book, former resident profiles Elmwood Mansion.
– When mules moved a York County mansion.
With its visability along Interstate 83, Memorial Hospital is a clear York County landmark. For posts on other county structural icons, see this blog’s Landmarks archives.