Historic Adams town to lose piece of its history 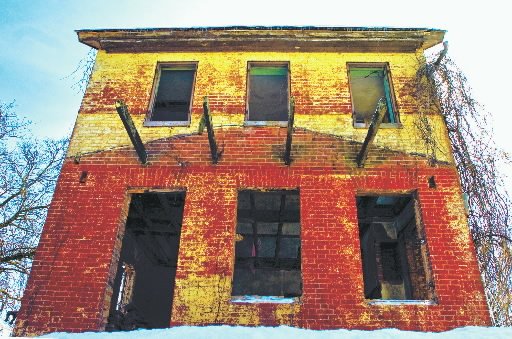 Countless horse-drawn and motor-propelled conveyances have passed this 156-year-old New Oxford home since it reached its two-story height. But soon, the house will be demolished. Background posts: Striking architecture lined York’s South Duke Street and ‘It’s so sad to see such a great piece of architecture fall down’.

Who doesn’t feel a sense of loss when an old house or building faces the bulldozer?
One would like to think that such monumental buildings as the York City Market, York Collegiate Institute or York County Academy would be restored today instead of knocked down to provide vacant lots, as occurred 40 years ago… .

But every week, lesser structures come down around York and Adams counties, often without notice. (The old house on Susquehanna Trail near Lake Redman is such an example.)
An old house is coming down in New Oxford, and we have advance notice of its demolition. So we have time to think a bit about this house that saw John B. Gordon’s Confederates march past on their way to York and the Susquehanna and early automobiles sputter west on the newly paved Lincoln Highway. Maybe we’ll even drive by for a visit and wonder why such irreplaceable houses can’t be preserved.
So here’s the story of the house, as reported in the York Daily Record/Sunday News (2/24/08):

Mabel Galleher can remember when her father and mother, Nathaniel and Mary (Murren) Miller, and other family members would sing Christmas carols in the front parlor of the soon-to-be-demolished two-story brick home at 405 Lincoln Way West in New Oxford.
“Family time was always a great time,” the 81-year-old said.
When all family members came together, she said the house, now 156-years-old, would be filled with almost 70 people laughing, playing games and enjoying each other’s company.
Now, the uninhabited house will be coming down in a few weeks. The original brick section of the home was built in the 1850s.
In 1921, the Millers bought the home and more than 60 surrounding acres for $11,000.

Nathaniel Miller was a farmer, auctioneer and insurance salesman.
“He wouldn’t let me help because I’m a woman,” Galleher laughed.
After Miller’s death in 1968, the family sold the house.
No changes were made to the home after his death.
The last known resident was in the 1980s, about the time a barn on the property was torn down for safety reasons.
No one has lived in the house since, she said.
The side door was the real entrance and the front parlor was reserved for special events.
“Only the Easter Bunny used the front door,” Galleher said.