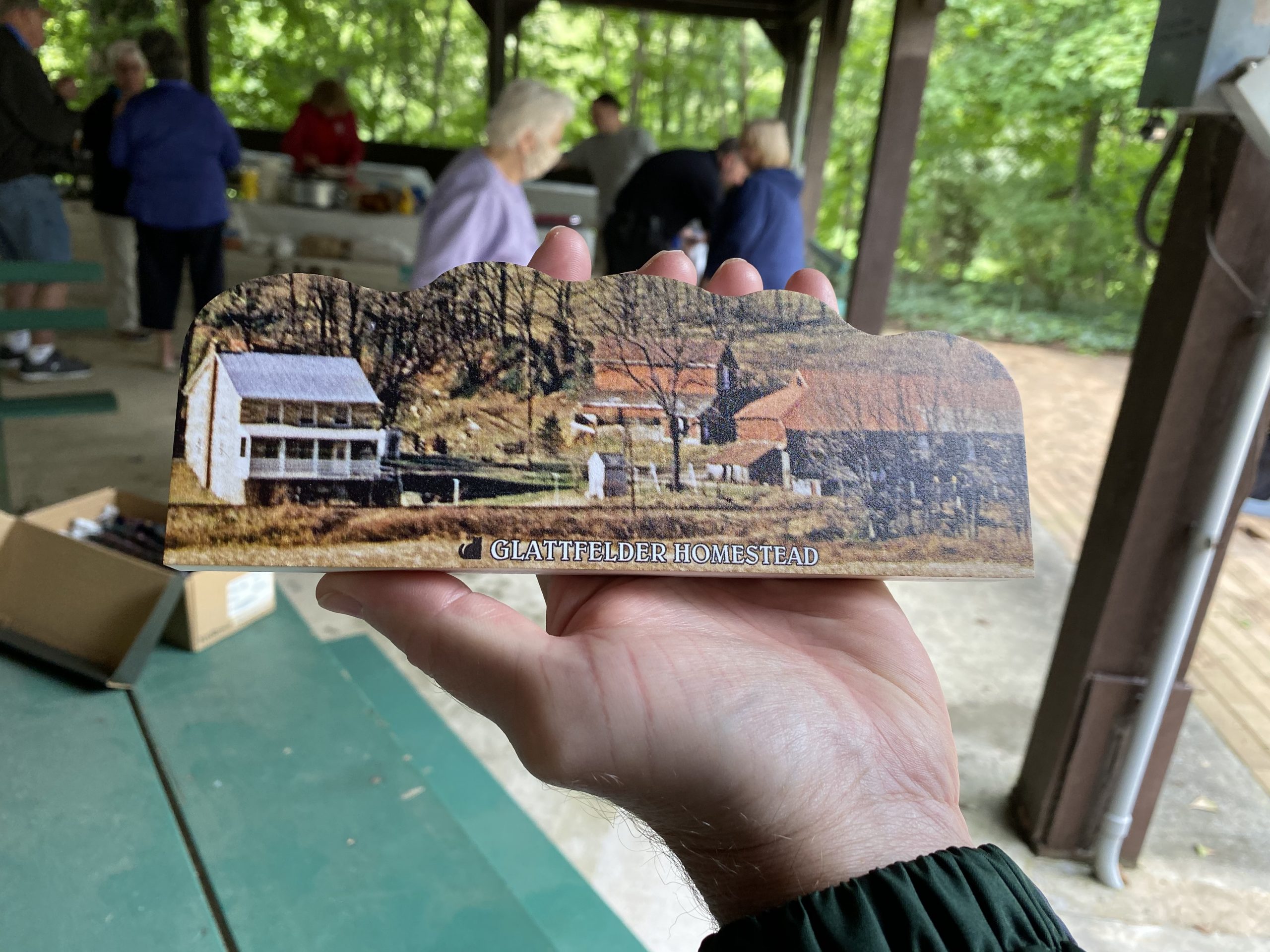 In March 1976, a tornado rushed through York County, leaving behind thousands of dollars in damage and, fortunately, no injuries.

The tornado targeted the Casper Glattfelder Association of America’s pavilion at Heimwald Park near Glatfelter Station. The York Daily Record reported the high winds “lifted up” the pavilion and dropped it “into destruction.”

The report no doubt was true because the pavilion, scene of the Glattfelder family’s annual reunion for decades, was not moored to the ground.

In 1934, the rotten part of the pavilion’s support had been removed and the entire open-air structure just rested on the cement floor.

Fortunately, the descendants of Casper Glattfelder are better grounded in their ancestor’s home county, and the replacement pavilion on the Springfield Township grounds is, too.

Since 1906, the Association has been meeting around and on the original creek lands settled by the Swiss-born Casper after he arrived in America in 1743, six years before York County was birthed.

In these days of pandemic, the annual reunion met again last weekend, albeit in diminished, socially distanced numbers.

They followed the format of the usual late-July annual gathering with a board of directors meeting drawing on tradition. They opened by singing all six verses of “O God, Our Help in Ages Past” and closed by standing and singing the “Reunion Hymn.”

In that closing hymn, those assembled in the pavilion also sang the chorus with every stanza — no shortcuts.

One year, a reunion member observed, the reunion varied from these practices — sitting or skipping choruses — and “he heard about that” from an aged family member.

Some board members listened in by phone and voted by voice on the many items on the packed, two-page agenda.

As is customary, they recognized the oldest family member (Dean Gladfelter, 84) and those “traveling the farthest” (Sarah Melcher, Connecticut) and Pamela Tuscany (Florida by teleconference).

You could tell that these practices or liturgies at these rites of July — or September in 2020 — have played a role in keeping this venerable, sprawling family in contact.

Indeed, this gathering during COVID-19 marked the 115th meeting of the group and the 75th consecutive gathering.

It’s not clear that a large gathering of the family met every year in World War II, but did so in 1918, just before the Spanish flu severely ravaged the county.

They came by train

The original Glattfelder family reunion gathered at Springfield Township’s Bupp’s Union Church in 1906 and later met in woods around the family’s first homestead near Glatfelter Station.

In 1913, the association purchased its current 2-acre meeting ground, on the hill above today’s Glatfelter Station rail trail parking area.

Glattfelder descendants often would travel to the reunion each year via the Northern Central Railroad, departing and boarding the train at Glatfelter Station and walking the short distance to the reunion grounds. Wooden steps, long gone, led from the road to the reunion area.

The land overlooks what was originally Casper Glattfelder’s homestead, west of the Codorus Creek.  The early 1800s home of Felix, Casper’s son, is the old house visible to rail trail users just across the truss bridge along the trail in Glatfelter Station.

Today, the pavilion has another anchor, of a kind. Two sides are framed by a 5,000-brick patio.

The names of about 1,300 family members are inscribed in the bricks arranged under the names of Casper’s five sons and reaching 11 generations deep.

A cloud of family witnesses, thus, keep watch on the pavilion and reunion grounds on this hillside overlooking the family’s early acreage.

They’re there to watch for tornadoes of the bad weather kind, to be sure, but also perhaps to protect against the forces of culture that are so hard on families.

Those witnesses heard 115th anniversary reunion members sing — or perhaps they joined in — the first stanza of the opening hymn with the appropriate reference to storms of all kinds:

“O God, our help in ages past, Our hope for years to come, Our shelter from the stormy blast, And our eternal home.”