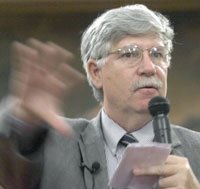 George Hay Kain III
If Yorkshire as in pudding is pronounced york-shur, why isn’t Yorkshire as in Springettsbury Township pronounced similarly instead of the local “Yorkshyer.”
And Hayshire should be pronounced “Hayshur.”
The man who made these points should know. The family of George Hay Kain III lent its name to Hayshire.
Kain, of the prominent Emigsville-area family, addressed a packed audience attending a Emigsville Heritage Project meeting at the Manchester Township village’s Otterbein United Methodist Church.
Kain also told stories about the rebel visit to Emigsville in late June 1863. Here’s another one from my York County Civil War book “East of Gettysburg” … .

“Daniel Roland was away at war, leaving his wife, Ellen, to fend for herself and their five children.
The family lived in a remote wooded area, more than a mile from Emigsville.
Ellen Roland figured her family was safer in Emigsville from foragers and potentially drunken rebels.
On her way to town with her children, she ran into a band of about 20 graycoats.
“Where’s your husband? Why are you leaving home? Do you know we will burn down your home sooner, if it were unoccupied than if you lived there?” they asked her. The invaders often used the threat of firing homes but never intentionally did so during their occupation.
They let her go, and she walked through rebel lines to the safety of friends in town.