When York County undertakers served as woodworkers … and vice versa 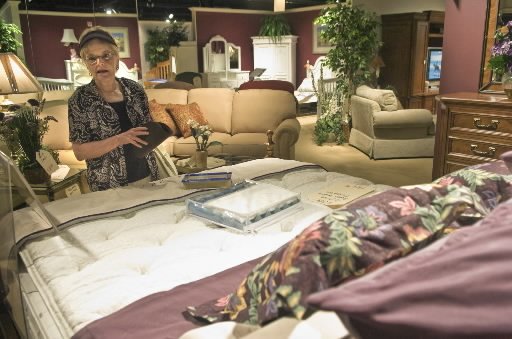 Jan Weitkamp of York Township shops the Zarfos Furniture Store in Red Lion. Weitkamp would visit the store with her parents and later bought her own furniture from Zarfos. A century ago, her family would have used the store’s undertaking services.

George Hay was leader of local volunteer troops in the Civil War.
He was part of the delegation that rode to Farmers Post Office, 10 miles west of York, to surrender the town to the advancing Confederates.
But he is also known today for his civilian occupation. He made furniture – and caskets. He was an early York County furniture maker/funeral director… .

The two went together because casketmaking was a steady business and casketmaking required the sure hand of someone who could also make furniture.
Today, vestiges of the dual occupations can be seen in towns throughout York County. Funeral homes/furniture stores stood side-by-side or used the same buildings in Jacobus (Leader’s), Seven Valleys (Goodling’s) and Mount Wolf (Diehl) and several other communities until relatively recently.
The combination made the news again recently when a York Daily Record/Sunday News story appeared about the closing of the century-plus-old Zarfos Furniture Store. The Zarfos and Burg families, venerable Red Lion citizens, partnered in a funeral home/furniture store combination.
In fact, that partnership came together 100 years ago. Later, the brothers-in-law went separate ways. A Red Lion funeral home continues to operate under Burg’s name. And Zarfos is closing down, as the following story recounts:

Zarfos Furniture Store in Red Lion opened more than 100 years ago as a furniture retailer and funeral home.
Now, it seems that mourners have returned to the building not to grieve the passing of a loved one, but to lament the closing of a local landmark.
“It’s almost like a funeral here now,” said Richard F. Bulgarelli, president of Zarfos Furniture. “People are saying their good-byes and other things like, ‘Where am I going to buy my furniture now?'”
Depending on how fast the roughly 45,000-square-foot store can sell its merchandise, Zarfos Furniture could close its doors by late September, Bulgarelli said.
The store launched its Going Out Of Business sale Friday, which offers significant discounts on furniture and bedding.
“It’s just been such a pleasure working with these people, I’m really going to miss that,” said Jim Bisker, 64, a Zarfos employee for 35 years.
On Jan. 3, 1907, Charles Zarfos and his brother-in-law, Earl B. Burg, partnered to open the Zarfos & Burg Furniture Store and Funeral Home in Red Lion.
In 1923, Zarfos and Burg constructed a brick building on the same site to house their growing business.
Eventually, both businesses grew to the point where Burg moved his funeral home to 134 W. Broadway in the borough, leaving Zarfos as the sole proprietor of the furniture store.
At the time, few other furniture stores dominated the landscape, and the local retailer carved a reputation as one of the premier home furnishing businesses in the area.
Over the years, the store changed with its customers’ tastes and, in the late 1970s, started to display furniture in room settings to show how the merchandise might appear in a person’s home, said Deb Angstadt, 53, a 34-year Zarfos employee.
“When I first started, all the furniture was in aisles, lined up side-by-side on hardwood floors,” she said. “It looked like a bowling alley.”
Within the last 10 to 15 years, the furniture business shifted dramatically, forcing smaller operations, such as Zarfos, to compete with stores such as Boscov’s, Sears and Target, Bulgarelli said.
“The small mom-and-pop shops kind of gets pinched,” he said. “There are only so many furniture dollars being spent. The more furniture options out there, the less we get.”
Also, the way that people buy furniture has changed.
The current trend is for many people to go out to other retailers and buy moderately priced furniture that they can pick up immediately.
“People don’t think that furniture is a priority,” Bulgarelli said.
At Zarfos, customers will place orders for custom furniture that could take six to eight weeks to come in and be delivered, he said.
“We have a lot more options in terms of colors and fabrics,” he said. “For some people, that has become less important, and instant gratification has become more important.”
In the past, people would take time to buy their furniture, almost making an event out of going to the store, Bulgarelli said.
“They would go back to the furniture store they knew and trusted,” he said.
Jan Weitkamp, a longtime Zarfos customer and York Township resident, said that, as a child, she would tag along with her parents to the store as the couple would pick out furniture.
Later, after she was married, Weitkamp returned to Zarfos to furnish her home.
“It was a family tradition to come here and buy furniture,” she said. “It’s just so sad to lose friendly places like this.”
Michael Clark of Shrewsbury said he and his wife, Christine, are loyal Zarfos Furniture customers and depended on the local retailer for quality merchandise.
“Now that it’s closing up are we now forced to go to Wal-Mart to buy cardboard furniture?” he said. “I think supporting local businesses in so important.”
Workers, as well as customers, expect to suffer once the store closes its doors.
At one time, Zarfos employed 30 workers. Now, the store is down to 16 employees.
“When you’re not selling as much furniture, you don’t need as many people to sell it or deliver it,” Bulgarelli said.
Bisker said he is not sure what his plans will be after the Zarfos Furniture Stores leaves Red Lion.
“You don’t live to hear that you’re not going to have a job,” he said. “When you enjoy what you’re doing, you want it to last forever.