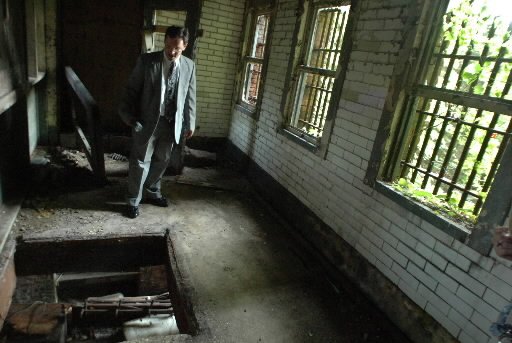 Eric Gearhart stands near what he called the ‘hanging hook,’ the gallows area in the old York County (Pa.) Prison on Chestnut Street in York. The prison, owned by Gearhart’s parents, is for sale for $3.9 million.
So the old York County Prison is for sale with the idea still out there that it could make a nice themed restaurant.

Patrons could eat a meal in any of the 84 cells.
Well, the old fortress actually needs to remain standing for at least two reasons.
First, it’s in a prime area between the baseball stadium and Broad Street development plans. It seems that creative use of the structure could provide a prime connector between the two areas.
And secondly, can you imagine the cost to demolish it? And its remains would shorten the limited life of Modern Landfill even more.
A recent York Daily Record story on the proposed sale of the historic building follows:

The old York County Prison in the city has been empty for more than two decades, but now the owner is selling it with hopes that the buyer will put it to use.
The former prison on Chestnut Street is for sale, listed at $3.9 million. The building has been vacant since it closed its doors in 1979.
John and Joyce Gearhart bought the 2.91-acre property in 1982 with big plans. They wanted to put a jail-themed restaurant complex in, said their son, Eric Gearhart, an agent at Rotz Residential Realty.
Looking around at the paint peeling from the walls of cells, he can still imagine it. There would have been different dining options on each floor. Fast food and an ice cream parlor were planned for the first floor, or patrons could have dinner in one of the 84 cells.
But after riots at the overcrowded Camp Hill State Correctional Institution in 1989, the family considered making the building a privately run prison, Gearhart said. That idea fell by the wayside.
In 2003, attendees at a workshop sponsored by the National Trust for Historic Preservation came up with five possible uses for the space, from a vocational school to a community arts center to mixed use with loft apartments, according to a workshop report housed at the York Heritage Trust.
The same year, the York Street Community Center, a nonprofit run by the Stillmeadow Church of the Nazarene, considered buying the building to make parking space. But nothing came to fruition.
Over time, the Gearhart family heard rumblings about a baseball stadium.
“We thought let’s wait and see what happens there,” Gearhart said.
Now that Sovereign Bank Stadium is a reality, the Gearharts still think a restaurant complex is the best idea for the old jail. But they want someone else to take the reins. From the beginning, the family didn’t want to be involved with a restaurant that served alcohol, Gearhart said.
“We decided rather than go the route of finding restaurants, let’s sell it to a (company) that already has three or four chains,” to put there, he said.
But if someone has other plans for the building and is a qualified buyer, “so be it,” he said.
“We’d love to see something happen there,” said Kevin Schreiber, marketing and economic development coordinator for the city.
The property is between the stadium and future development on Broad Street, where the Graybill building will soon be demolished. City officials hope a grocery store will locate there soon.
“It’s a natural sort of connection,” Schreiber said. “Architecturally and historically, the building is magnificent.”
He’s heard numerous ideas, such as restaurants, a microbrewery and modern housing options, floated for the prison site.
“The building screams for something to be done with it, some adaptive reuse,” he said.