York columnist: ‘We would ‘hex’ them if they ignored us’ 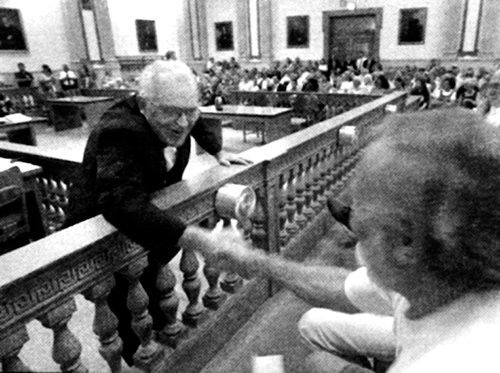 J. Ross McGinnis portrays Harvey A. Gross in the York County Bar Association’s presentation “A Spell to Remember,” based on the Hex Trial. When he’s not playing Harvey Gross, Ross McGinnis is a principal with the York-based law firm of Stock & Leader. Background post: ‘Powwowing was done for good’.

Jim Hubley, York Daily Record columnist, recently mused about the famous Hex Murder of Nelson Rehmeyer and the subsequent trial of his three assailants.
Hubley called for a repeat of the York County Bar Association’s “A Spell to Remember,” a 1999 re-enactment of the murder trial. The Daily Record will pick up his call in an upcoming editorial.
Almost in passing, Hubley revealed an interesting moment from that time: …

“Actually, I was at a smart age at that time, along with friends, and we had fun teasing girls. We would ‘hex’ them if they ignored us. In little time, we forgot the ‘hex’ fun.
So, while the world watched what has been compared to the Salem witch trials, some local young folks had fun with it.
Therein is a good lesson for those looking to preserve memories of the trial.
It was serious business. A man was killed. York County’s substitious nature had boiled over. People with serious ailments no doubt were tricked by powwow doctors. It was hard to see how York County could move ahead when throttled by such 18th-century mysticism.
But many people simply lived their lives in those days, forgetting ‘The Spell to Remember.’
Hubley’s September 2007 column follows:

Less than three months ago, an Off the Record column closed with the sentence, “That is what I remember of hexes and powwows and what must be the best-known historic event in the history of York, a ‘hex’ murder.”
Much to my surprise, recently that historic crime has been grabbing headlines, reminding readers of the unforgotten murder on Thanksgiving Day in the year of 1928.
As I understand, plans had been under way to reopen the residence where the brutal “hex” murder occurred, located in Rehmeyer’s Hollow, North Hopewell Township.
The structure would have become a museum, open to the public, retelling the story of York County’s favorite murder.
Tourists, travelers, guests, even many York Countians, would be fascinated to visit the place where a “hex” murder took place in one of the country’s oldest, well-known and popular communities.
However, when similar ideas are advanced, there is always opposition to whatever is being proposed or considered.
Reopening the site or leaving it closed at the present time is of little interest to me, and the subject in this column ends.
Actually, I was at a smart age at that time, along with friends, and we had fun teasing girls. We would “hex” them if they ignored us. In little time, we forgot the “hex” fun.
Instead, seven decades after the “hex” business, a spin-off event took place in the Market Street Court House during the 250th anniversary of the city of York.
That was only eight years ago, during the varied activities which featured in the month of August parades, music, exhibitions, etc.
One of the highlights was the re-enactment of the 1928 “hex” murder trial, which at that time had attracted the most important news persons from the entire nation.
Undoubtedly, that 1928 trial was and remains one of the best known in the now 258-year history of our White Rose city.
There were no television reporters attending simply because there was no television. Radio was coming into its own and had produced popular news people, admired by radio listeners. They rushed to York, as did the very best from the still-typing newspaper individuals. They were drawn to York not so much because of a robbery and resultant murder but because they had been informed and believed that York and surrounding towns was a place where powwowing witches ran around casting spells on each other and any who got in their way.
They had gotten more than they had asked for. There was a health problem — 2,000 influenza cases when they arrived in York.
By the time the trials were over, the flu total had reached 2,500. Fortunately, none of the well-known visitors became ill with the flu.
In the meantime, they had been herded to a pretrial meeting by local judges. Strict rules were announced. Only three visiting reporters and three local reporters were allowed to cover the trials (three of them).
Photographs were banned inside the courtroom as well as outside the courthouse steps and in the vicinity of the courthouse. Protests went to deaf ears, including the York mayor, the late Jacob Weaver, who promised to entertain the visitors in the local “cooler” should any news person go beyond restrictions.
So much for the crime and the trials of the original powwowing murder; let’s return to the re-enactment of the trials back in August of the 1999 celebration at York’s 250th celebration.
That presentation of a previous trial was enacted by the group most qualified to give the performance. It was the York County Bar Association and a cast of local lawyers.
It was a hit at the overall celebration. There were three shows, and each was ruled a complete “sellout.”
The member thespians of the Bar Association staged their offering at the courtroom of the original “Hex” trial in the York courthouse.
The script was altered and did not include murder.
Not only was their stage performance a sparkling success, the story went around that all three had been a complete “sellout.”
That introduced a bit of humor because the lawyers from the Bar Association did not charge or sell tickets.
Maybe the Bar Association could come up with a modern repeat of its 1928 “sellout” success, without putting a “Hex” on the performance.