Carly Simon at WSBA: ‘What do you want to hear?’ 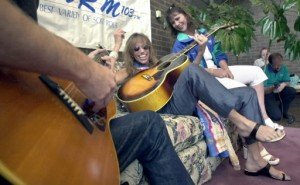 WSBA’s Ruth O’Brien (right) joins Carly Simon on a couch in the radio station’s lobby after singing with Simon in singer’s visit to York, Pa.’s, WSBA/WARM station 2000. Background post: Memories of the Oaks pile up.

Today, old-timers remember the original, now-demolished
WSBA building as the place that 101 Ranch Boys and other stars performed lived the early days of radio.
When WSBA/WARM’s station has run its course probably scores of years from now, Carly Simon’s visit there in 2000 will likely come to mind… . 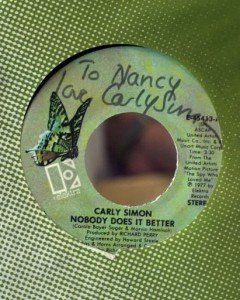 Nancy Shue of York met Carly Simon during a visit to WSBA/WARM’s building in 2000. She brought a record of Simon’s single Nobody Does It Better from 1977 to get an autograph.
Simon stopped there on a promotional tour, sat behind a mic for about an hour and then performed a two-song set for station employees and some lucky contest winners from the community.
“We haven’t warmed up or rehearsed, so we’ll rehearse in front of you,” she said, and The Smile appeared. “What do you want to hear?”
A York Daily Record story on her visit follows:

Nancy Hamm of York won the chance to meet Carly Simon during Simon’s appearance at WARM-FM (103.3) Thursday. Hamm brought a couple of items for Simon to sign, including this old 45 rpm single of ‘Nobody Does it Better.’
Women (and a few men) in and around York dropped what they were doing Thursday morning. They missed work. They rounded up kids. They dug into their old album collections.
All for Carly Simon.
More than 150 fans flocked to see the ’70s pop music star during an impromptu appearance at Borders Books and Music in Springettsbury Township. They came loaded with her records and CDs and children’s books. They stood in line for two hours. They got autographs and posed for pictures.
Julie Weiss of Stewartstown canceled half a day’s worth of hair salon appointments. Kathryn Peters drove more than an hour from Chester County.
Everybody had a little story to share. And Simon, seated at a table in Borders’ Art section, seemed genuinely happy to listen.
“This is my daughter, Carly – I named her after you,” Patty Smith of Wrightsville told the singer.
That famously wide smile exploded across Simon’s face, and she immediately began chatting with her 10-year-old namesake.
What do you like to do? Oh, you play the clarinet – I love the sound of the clarinet. Was it hard when you started out? I remember I had so much trouble learning to play the guitar, I couldn’t quite get my hand around the neck. I tried to learn how to play harmonica not too long ago, but I just couldn’t do it. You have to start when you’re young.
“She was great – she just kept talking,” Smith said after the encounter. “I was surprised at how much time she takes to talk to people. She seems to really give a darn.”
And what did Carly Smith think? “Pretty cool,” she said.
That’s how it went for several hours, one person after another reveling in their chance to meet a pop culture icon. The line snaked all the way to the Business section at the back of the store. A stack of her new CD, “The Bedroom Tapes,” slowly shrank. Borders spokesman Shawn Myers expected to sell every copy in the store.
Simon has been promoting the new record for the past three months. She wanted this part of it to be loose and fun.
“The idea was to get a really classy Winnebago – if that’s not a contradiction in terms – and take ‘the bedroom’ of ‘The Bedroom Tapes’ on the road,” she said during a brief interview Thursday. “We would do interviews in ‘the bedroom’ and everything. Unfortunately, the vehicle that arrived didn’t have a bed.”
So they had to trade the Winnebago for a gold Ford Expedition. And then her new record label, Arista Records, decided that, hey, wouldn’t it be great to go to radio stations that are playing the new CD.
That’s how York landed on the itinerary: WARM-FM (103.3) picked up the first single, “So Many Stars.”
It wasn’t exactly what she envisioned, but it beats doing concerts. Simon is notorious for her reluctance to perform big shows.
“I’ve always liked meeting people one-on-one, as opposed to being in front of an audience, with footlights in my eyes and not being able to see any faces,” she said.
She did a lot of one-on-one meeting Thursday, at Borders and earlier at WARM 103. She joined morning hosts Kelly West and Rick Sten for about an hour, answering questions, taking calls and listening to a handful of songs from the new CD.
Then she made a quiet entrance into the station’s lobby, waving to a few onlookers peering down from a second-floor balcony. She and guitarist Michael Lockwood sat on a couch to do a friendly, two-song concert for sta tion employees and the four contest winners selected a day earlier. Her tall, thin frame was clothed in shiny gray slacks, a large blue scarf, and a pink tank top shirt with “The Bedroom Tapes” written across it.
“We haven’t warmed up or rehearsed, so we’ll rehearse in front of you,” she said, and The Smile appeared. “What do you want to hear?”
Somebody shouted out, “You’re So Vain,” and Simon launched into a spirited a cappella version. She did one more song, then climbed back into the Expedition for the trip to Borders.
“I don’t know how many people are going to be there,” she said.
A lot, as it turned out. Carly Simon still has plenty of fans in and around York, Pa.