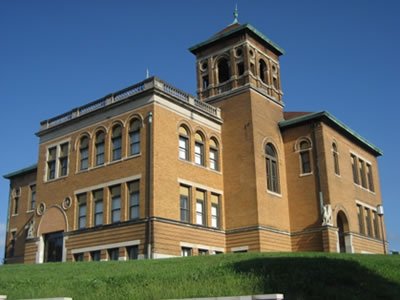 The Spring Grove Public School was dedicated in 1898 and enlarged in 1921. As this is written in 2008, its successor building, the Spring Grove Area High School along old Hanover Road, is in its final days as secondary school. Photo courtesy Spring Grove Historical Preservation Society. Background posts: Spring Grove museum displays horse gas mask and more, ‘Persons should not be too modest’ and Glatfelter family history is as clear as … paper .

According to my “In the Thick of the Fight,” the town shut down on the evening of Aug. 14, 1945 and the next day as people everywhere celebrated.
While firing of guns stopped on the war front, people in Spring Grove took out their guns and aimed at the sky.
The noise reminded some of Fourth of Julys before the government banned the wartime sale of fireworks.
Someone broke into Spring Grove High School after midnight and pulled the bell rope so hard and often that the bell turned over.
They snapped the rope from the bell.
The York Daily Record/Sunday News captured more memories in a story (April 28) about an alumni prom at the current high school building, vintage 1953:

It’s been 28 years, but Wendy Boutilier finally got to wear her prom dress.
The 1980 graduate of Spring Grove Area High School had the pink dress picked out for her senior prom, but her date took another girl, and the dress went into storage until recently.
Boutilier was one of about 350 fellow graduates of the high school who had one last chance to tour their alma mater Saturday night during an alumni prom.
The former students got to sit back and reminisce about their days at the school.
“The hangout lobby still looks the same,” said Robin Wendt, a friend of Boutilier.
Wendt said it was her first time back to the school since graduation, except to see her sons compete in sporting matches in the gym.
“It’s weird,” Wendt, a 1973 graduate, said.
Things have changed since she left school. The building grew in size as the population grew. More classrooms were added in the 1970s. In the 1990s, trailers had to be hauled in to serve as additional classrooms.
After expansions and 55 years of use, the school will close after this school year. A new high school is to open this fall.
The high school was born out of the need for more space. Before its opening in 1953, students from grades one through 12 attended classes at the same building.
That building is now the administration building on East College Street in Spring Grove.
Nancy Doerflein was a member of the 10th class to graduate from the high school in 1964.
A lot has changed since she was a student in the building.
It was a lot smaller, but she’s noticed the district still has that small-town feel to it.
“It’s been fabulous over the years” seeing the school grow, Doerflein said.
Doerflein said the day she graduated is a memory that sticks out when she thinks back to her school days.
Her father was a photographer, and he told members of the school board to hold Doerflein as she received her diploma until he got a “perfect picture.”
They did, and Doerflein got her diploma and her dad got his shot.

END OF AN ERA
As graduating students of Spring Grove Area High School cross the stage to receive their diplomas in June, they will be the last class graduating from the school on West Jackson Street.
A new high school is scheduled to open for the 2008-09 school year. The old high school could be converted into a middle school in the coming years.