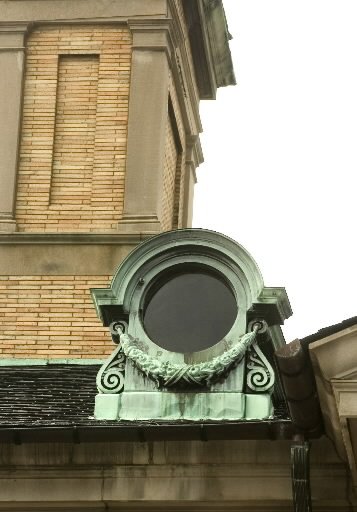 This is one of two dormers that remained in place after renovation of the old Dempwolf-designed York County Courthouse into a York County administrative center. The dormer is an example of the design touches the York, Pa.-based Dempwolf family of architects gave to their buildings. Background posts: Downtown thrived in post-World War II York, Pa., What was famed architect John Dempwolf’s own house like and How to accurately restore a historic home.

Some students in a recent session of my OLLI class at Penn State York were unfamiliar with the Dempwolf brothers and their family successors who designed so many significant buildings in York.
The Dempwolfs’ work was so pervasive around York that it’s easy to overlook it in plain sight.
J.A. and Reinhardt Dempwolf headed the Victorian-era firm whose shaping of York’s skyline lasted well into the 20th century.
The following story, taken from York County’s 250th anniversary publication “Builders and Heroes,” tells more about the Dempwolfs: 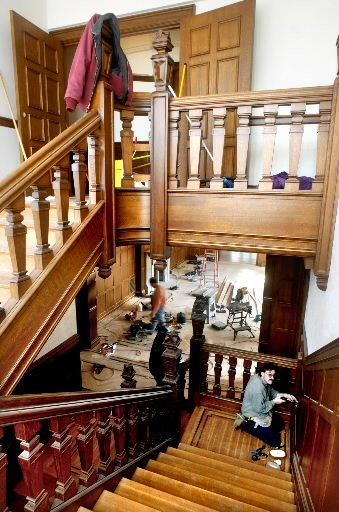 Crews work on the grand staircase inside the Dempwolf-designed Hahn Home in York. Fire damaged the York home in February 2003 and it was later renovated into a funeral home.

Many York County residents have felt the influence of brothers J.A. and Reinhardt Dempwolf without ever knowing it.
Buy some fruit at Central Market, worship at First St. John’s Lutheran Church, visit the York County Courthouse or stroll by homes on South George Street, and you will be affected by their work.
As the faces behind J.A. Dempwolf Architects, the German-born John Augustus Dempwolf, his brother, Reinhardt, and later J.A.’s son, Fred, would leave their mark on York County like no other architects before or since.
Born in 1848, J.A., his parents and siblings came to America in the 1860s, settling in York in 1867.
J.A. became a carpenter’s apprentice and shortly thereafter found employment with a building contractor. This exposure to the construction industry led him to study at the Cooper Union Institute in New York City. After graduation in 1873, he supervised the construction of Holy Cross Catholic Church in Boston.
The following year, he returned home to York, started an architectural firm and completed the first of what would be many Dempwolf-designed buildings, the First St. John’s (German) Evangelical Lutheran Church on West King Street.
In 1879, he married York native Sallie Greiman, and together the couple had 10 children, including Fred, who would later follow his father into architecture.
While J.A. was establishing his business, he noticed his younger brother, Reinhardt, had a talent for drawing and designing. A graduate of the York County Academy and York Collegiate Institute, Reinhardt soon found himself enrolled, at J.A.’s direction, at the Ecole des Beaux-Arts in Paris.
What he learned there would greatly influence the work he did when he returned home and joined his brother’s firm in 1884.
Together, the two designed municipal buildings, hotels, schools, churches and residences. Among these are the Colonial Hotel, the York Trust Company, the York National Bank, the Grumbacher & Son (Bon-Ton) building, Bear’s Department Store and William Fluher’s jewelry store. Their work for area public school systems included buildings in York, Spring Grove, Hanover and Columbia.
“In their heyday, they were probably the most prolific architects around,” York architect Mark Shermeyer said. Founder of his own firm, Shermeyer & Associates Architects Inc., Shermeyer is something of an expert on the Dempwolf family because he did his college thesis on the subject.
Dempwolf was “the most influential firm through the 1950s. Just about every architect in the area was schooled at the knee of J.A. and Reinhardt,” Shermeyer said.
In addition to sculpting the York skyline, the Dempwolf brothers spent time on projects throughout Pennsylvania and places far beyond. Their work can be seen in a church in Elkhart, Ind.; a summer cottage in Cape May, N.J.; a hotel in Denver, Colo.; and a house in Brooklyn, N.Y.
When Fred joined the firm after graduating from MIT, he put his talents into designing Martin Memorial Library, York City Hall and the York Telephone and Telegraph building.
With so many distinct buildings to their credit, choosing the Dempwolf family’s best work is a difficult task, Shermeyer said.
“It’s hard to say because they did so much over such a length of time,” he said. “They were very adaptable. They did what was popular at the time.”
In his later years and long after his retirement in 1930, Reinhardt would say his greatest work was the Jackson Theater, now known as the Capitol Theatre, on George Street.
Although the firm carried J.A.’s name, many architects and historians today now recognize Reinhardt as the artistic force behind many of the firm’s triumphs, Shermeyer said.
J.A. was extroverted and had a good head for business while Reinhardt worked behind the scenes. J.A. served on a multitude of boards, including the YWCA, York Collegiate Institute, Children’s Home of York and the Benevolent Society.
He also was a director of the York Trust Company, York Hospital and the York Hotel Company as well as superintendent of the Christ Lutheran Church Sunday School.
He became a member of the American Institute of Architects, and in 1926, the year of his death, he was named chairman of the Pennsylvania State Arts Commission.
With York County celebrating its 250th anniversary this year, it’s fitting to note that J.A. and Reinhardt were very involved with the county’s 150th celebration in 1899.
The two created a Court of Honor in the square of York marked by huge arches, the bases of which were planted on the four corners of George and Market streets. Each arch was 40 feet wide, 30 feet tall and 12 feet in depth.
Reinhardt also designed similar but less dramatic arches for the York Gas Company and the York Bank.
Because J.A. Dempwolf Architects closed its doors forever in the 1960s when Fred retired, one can only imagine what York County’s most dynamic and influential architectural firm would have designed for the 250th anniversary.