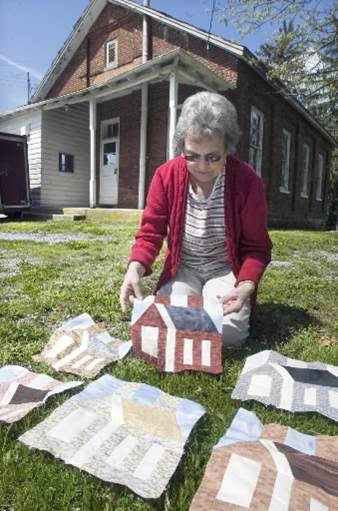 Ginny Lehr will raffle off a quilt to raise money to refurbish the Center Square School in Roundtown. The century-old Manchester Township schoolhouse is in need of repairs, estimated at $50,000. Background posts: Interesting Web site dedicated to American country schools, Roundtown. Where did that come from? and Pottery put the other Foustown – the one in Manchester Township, Pa. – on the map.
Many York County public schools began in church or Sunday school buildings before they moved to the one-room schools that thousands of county residents remember today.
Some schools were built for religious and public education. For example, the “Spring Grove Years, 1882-1982” states that the log Spring Grove school, built before 1850, was constructed “for the only use as a school house and for school purposes, of holding religious worship in the building by members of the Methodist Episcopal Church … .”
And, of course, some churches met in schools before building their own houses of worship. That is happening today… . 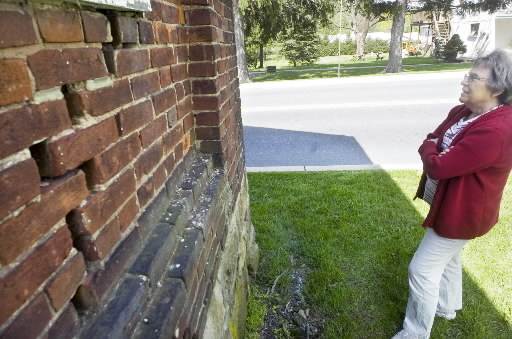 Center Square School needs loads of cosmetic and structural repairs.
Center School in Roundtown was built as a school and used by Grace Lutheran Church. The Manchester Township church still owns the old brick building and is raising funds to rehab it.
The York Daily Record/Sunday News (4/25/08) told about those efforts to save the school:

They know only their own memories of it for sure. When it was built is a mystery. The number of faces and events the old walls have seen is unknown.
But members of a church and local historians know they want to save Center Square School, a one-room schoolhouse in Roundtown, Manchester Township.
The school is owned by Grace Lutheran Church, said church member Ginny Lehr of Manchester Township.
Lehr was unsure when the school was built, but she has a photo from 1903 that shows the building, she said.
“At one time, it was used as our Scouts building,” she said. “Now, it’s just sitting there with Scout stuff stored in it. It’s deteriorated.”
A church committee and local historians hope to refurbish the old school. Once restored, the building could be used for community classes and meetings, Lehr said.
But the church needs help to pay for the restoration. She said initial costs are estimated at $50,000.
Church members and historians can do some of the cosmetic work themselves, Lehr said, but the foundation and brick work will require a professional.
“We’re coming up with some ideas to raise money,” said Lehr, who is making a schoolhouse quilt to raffle.
Manchester Township resident Louise Burns, 69, said the building holds special memories for many people. She recalled doing arts and crafts in the school as a Girl Scout when she was in her teens.
“It’s important because I think it was part of our church. They did use it for Sunday school classes at one time,” she said. “Now, it really needs some repair. It has a lot of memories there.”