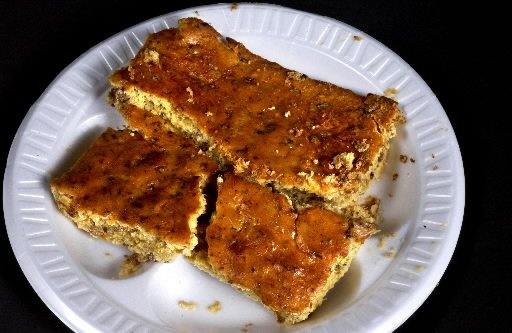 I was writing an editorial for the York Daily Record/Sunday News on the oft-mentioned prospect of a restaurant going into the old York County Prison, now for sale for $3.9 million.

I suggested the menu would have to fare better than food loaf, served over the years to problem inmates at the county prison.

What is food loaf?

I actually tasted some about four years ago when the York Daily Record did a story on the topic. It tasted like corn bread with curious lumps in it, which I didn’t want to think about.

The Daily Record’s story of this prison menu item with accompanying quotes from taste testers:

Food loaf: It’s what’s for dinner. And breakfast. And lunch.

At least for inmates who break the rules at the York County Prison.

The loaf has been served to inmates in the behavioral adjustment unit for about five years now, but county officials want to fine-tune their policy, including establishing the number of days it can be given to inmates.

By clarifying that policy, county officials want to make it clear and effective in case someone takes the issue to court saying it’s cruel and unusual punishment.

Food loaf is a combination of whatever was on the menu the day before at the prison. The kitchen staff grinds up the food — green beans, hot dogs, whatever — and bakes it in a loaf. It has the same nutritional value as the food served to the prison’s general population.

The loaf, though, isn’t as appetizing to look at or eat, and it doesn’t receive rave reviews from the inmates. And ketchup isn’t an option for troublesome inmates. Warden Tom Hogan says serving the loaf helps to deter inmates from breaking the rules again.

Other prisons across the country use similar measures, but some people don’t like the tactic. Bill DiMascio, executive director of the Pennsylvania Prison Society, said prisoners do not need to be served filet mignon, but they should be served a decent meal.

Some who are punished for breaking the rules suffer from mental health problems. Reactions often are an emotional response, and people do what they do because they don’t know a better way, he said.

He thinks prisons should inspire people to do better, and they also should be showing inmates what a balanced meal looks like.
“We’re not helping them make any kind of transformation,” he said.

Jeffrey Ian Ross, a criminologist at the University of Baltimore, said he thinks the loaf can be a deterrence but not for someone who is predisposed to angry outbursts and rule-breaking.

And sometimes inmates on loaf rations lose the desire to eat, resulting in weight loss, he said. Prisoners also can lose weight from the psychological effects of being separated from the rest of the prison.

Occasionally inmates can get a guard or another prisoner to slip them regular food, Ross said.

The county’s vice president commissioner, Doug Kilgore, said serving the loaf makes sense to him. He thinks it would be an incentive for prisoners to behave.

The county does have some rules, which will be spelled out in the policy, according to assistant county solicitor Donald Reihart.

The loaf, for example, cannot be made from scraps or leftovers.

It also cannot be served to inmates with medical conditions or those with religious backgrounds that prohibit them from eating certain foods, Hogan said.

Reihart said he has come up with recommendations that will keep food loaf — also called sweet cake or fruitcake by inmates — within “constitutional limits.”

County officials also are proposing that inmates only be served the loaf for 15 days. If there is a repeat violation, though, the inmates could get another 15 days, Reihart said.

The county has assigned the issue to the rules and regulations committee of the prison board for a recommendation.
So what did Kilgore think of a sample of food loaf? 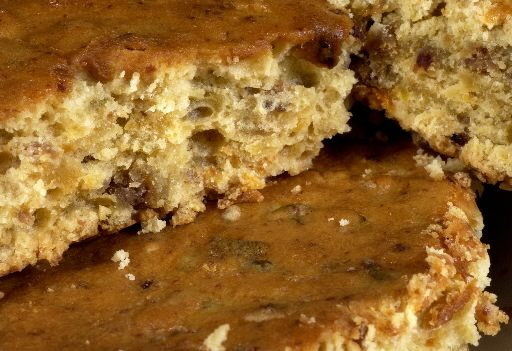 A closeup of food loaf.