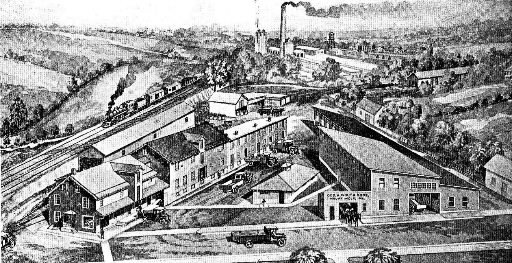 A. Wolf & Son grew along the river new New Holland, later Saginaw, by purchasing logs floating from points north on the Susquehanna and sawing them into lumber. It was typical of the lumber-related businesses flourishing along the river in the 1800s.The lumber mill later moved to a site, seen here, on the Northern Central Railroad which became Mount Wolf. Also of interest: Check out these other stories and photos about Mount Wolf.

Jim Wright has some information on Caesarville – located at one time near East Manchester’s Saginaw – and is seeking more.
He understood that the site was named for a slave named Caesar.
“This is the present site of the Wago Club. The area has had several names, one being Wago Junction.”
He pointed out that a saw mill/lumber company operated on this site in the early 1800’s, owned by Daniel Kraber. This mill was connected with the Eib’s Landing lumber yard. Eib’s landing and Caesarville formed one of the largest lumbering centers in Pennsylvania.
The “Gazeteer of York and Adams Counties, Pennsylvania” sheds additional light on Caesarville, pointing to the settlement as about six houses near the mouth of Rodes Creek where it flows into Conewago Creek… .

“Circa 1857 an aged negro slave by the name of Caeser who had been freed dug a cave in a bank at this point and used it as his place of abode,” the booklet states. Kraber took over the saw mill erected there in 1812 by Frederick Borger.
The reason that Caeserville, Eib’s Landing, Saginaw, Wago and other such sites developed along the river was to harvest wood floating down from Williamsport and other northern reaches of the Susquehanna. The wood was then used in York County and shipped to users throughout a broad region.
A vestige of these Susquehanna towns today is The Wolf Organization, owner of regional lumberyards and distributor of building supplies.
The Wolf lumber company started in Saginaw and later moved to what became Mount Wolf on the Northern Central Railroad.
Do you have other information on Caesarville? E-mail Jim Wright at stonehedgefarm@netrax.net or comment below.