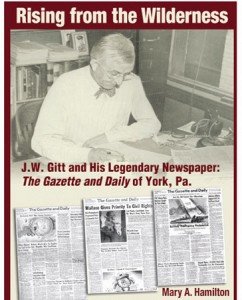 Mary Allienne Hamilton uncovered some news in her recently published biography on J.W. Gitt, long-time owner of The Gazette and Daily.
That the left-leaning York newspaper owner from 1915 to 1970 was not a communist had previously been reported based on Hamilton’s research and Freedom of Information Act requests. We know that for two reasons: The FBI could not establish such a link even after monitoring Gitt for a couple of decades. And Gitt joined his friend and political ally Henry A. Wallace in resigning the Progressive Party in the early 1950s because of Communist infiltration.
But here was the question: Did Gitt ever appear before a McCarthy-inspired committee?…

The answer is no, but one of his former employees got the grilling from a loyalty committee, Hamilton reports in “Rising from the Wilderness.”
“What they wanted to do was get J.W. Gitt. They wanted me to say that he was a Communist, and he was not,” Harry Sharkey told Hamiton.
As I explain in my York Sunday News column, the 342-page hardcover is filled with information that will be useful to readers of York/Adams history, journalism professionals and academics, Cold War specialists and liberals and neo-Progressives, among others.
To “Rising from the Wilderness, J.W. Gitt and His Legendary Newspaper: The Gazette and Daily from York, Pa.” is available for $29.95 at the York County Heritage Trust museum shop, 250 E. Market St., York, or on the Web, http://www.yorkheritage.org.