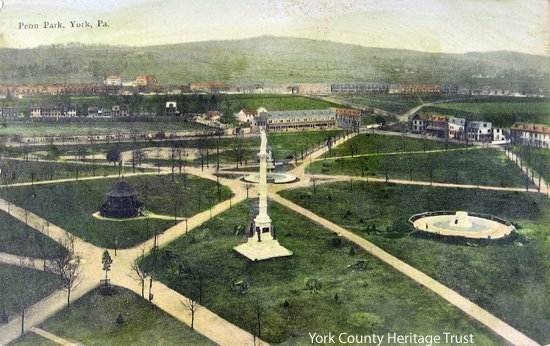 Penn Park has been the center of numerous gatherings in it 200-plus year history.
Posted by Jim McClureJune 19, 2019July 14, 2019 American Revolution, Archives, all posts, Civil War, Explanations/controversy, For photo fans, Local landmarks1 Comment

For the York Daily Record

We write “again” because it has served as a gathering place most of its 200-plus-year-old life, interspersed with some periods in which it fell on hard times.

The “desirable” part come from the telling fact we  just had two groups targeting their major events there on the same weekend.

Organizers of the Trey and Boo Basketball Classic and the 10,000 Acts of Kindness initially scheduled their events on the June 29-30 weekend. Organizers of both events were prepared to make it work.

But the dual use wouldn’t work, the city said, perhaps taking the 10,000 Acts of Kindness group at their word about turnout. Where are all those people going to park their vehicles? the city asked.

So the Kindness group lived up to their name and initially put up plans to move its unity dinner to Memorial Park, on the city’s outskirts.

Then it reconsidered, viewing the Penn Park location as better and rescheduled for Sept. 15. With this action, it endorsed a couple of Penn Park’s assets: its central location and its  areas for children.

So we have the Trey and Boo Classic, a basketball tourney dedicated to the late York High basketball stars Catrell “Trey” McCanic and Ricardo “Boo” Banks, that will bring the community together on June 29-30. And then 10,000 Acts of Kindness will gather its multitude there on Sept. 15.

In between, Equality Fest 2019 is set for Aug. 4 and What the Food Trucks will bring its annual community block party with about 40 food trucks to the park on Sept. 1.

With all this activity surrounding the park, it’s time to note seven of many moments that highlight the park’s past:

1. Penn Common, later Penn Park, became a place of arrival for freedman to York. Two wagons, for example, carrying formerly enslaved people from Leesburg and Alexandria, Va. arrived there in 1827.

One of the passengers, Charles Granger, became a longtime resident of the park. The arrival of such freedmen was sometimes unpopular north of the Mason-Dixon Line. But 500 people attended the funeral of Granger, known as Squire Braxton to many.

This moment, combined with its role as a venue for civil rights rallies and other gatherings in the 1960s, give the park a special place in the hearts and minds of many people in the black community today.

Most recently, Penn Park was the site of the first episode of racial encounters between blacks and police in 1928, unrests that covered two summers in York.


2. Two hundred years ago, Penn Park was not neatly bounded by city streets. A Lewis Miller drawing shows a green space with no southern boundary.

York’s earliest baseball stadium was in use on the site now occupied by Zion United Church of Christ in the 1890s. And bodies were exhumed in a pauper’s field to make way for a what many people know today as Hannah Penn Junior High, now a parking lot at College and Market. Both were counted part of the park.

3. The park became a much-used site in the Civil War, when the grounds served as a place where green Union troops, quartered at nearby Camp Scott at the old York Fairgrounds on the east side, were seasoned for battle. In 1862, a Union cavalry unit built barracks on park grounds. That installation was expanded into a military hospital that operated through the war’s end.

4. Despite these major links with history, the park was not always the well-manicured place that you see in post cards.

Historian George Prowell wrote in 1907 that for the decades after the Civil War until about 1890 Penn Park was a “neglected spot.”

Shortly after York became a city in 1887, monuments and fountains and memorials went up there. The towering Soldiers and Sailors Monument was the most prominent, rising in 1898.

5. In 1926, the Penn-Coates Memorial went up serving as restroom facilities for the public and a station for city police. The blocky building stands today.

Even in those days, the city had to deal with vandalism in its parks. That extended to other parks as well. Farquhar Park, the city’s second oldest green space, was the target of vandals in 1899, and the city had to increase police presence there.

6. The park has a long practice of featuring unusual attractions. It hosted alligators there, and a jet plane for parkgoers to crawl all over.

A memorial featuring a big Elk was one of the early park improvements. The Order of Elks built a rockery, complete with that intimidating Elk, was enjoyed by parkgoers for decades. The Elk was vandalized in 1987, and the rockery dismantled. The fate of this statue is indicative of what happened to the park in the next two decades, another low period for the park.

7.  In the past decade, the the public is slowly rediscovering the park. A highlight earlier this decade came when a traveling Civil War exhibit housed in a trailer set up there for people to stroll through and learn about history.

The Pennsylvania Civil War Road Show connected a piece of the park’s past with the present.

Penn Park’s popularity on the rise

The park’s potential has yet to be realized in a big way.

The green space facing houses ringing the park would make it a desirable place to live if some of those homes were renovated. The park’s proximity to the rail trail and the city’s downtown is also an asset to be tapped.

But aside from gaining the investment going on in other parts of the city, there are other ways for change to happen – incrementally, or maybe you could say with quiet virality.

Before he became a city official, Philip Given was a fan of Penn Park.

Given noted several years ago that the best way for the park to come back is for people to use  it – attend events like What the Food Trucks, for example.

Then they come back to further explore it.

And come to the next event.

Change, he noted, often doesn’t come at once.

“Most of the time change happens because of dedicated people willing to crawl through the mud to make their vision realized, slowly,” he wrote.

Penn Park, it seems, is making that slow comeback one big event at a time.