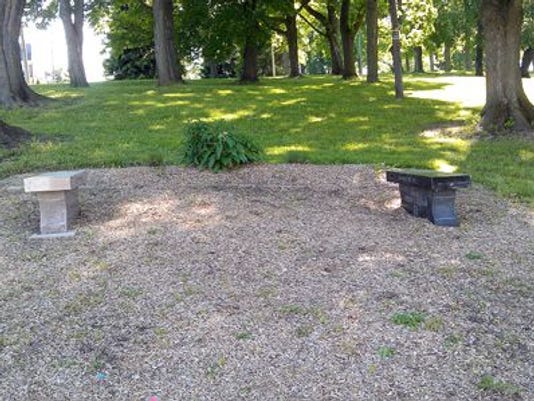 This Farquhar Park memorial was a result of a search in the aftermath of the race riot trials in the early 2000s to bring peace and healing. They are located near the site where then-police officer Charlie Robertson was part of a white power rally at the time of the riots. Robertson later became mayor of York and was acquitted in the race riot trials. The site is a stop on Kelsey Wisman's app 'The Predictable Past.' (Photo by Jim McClure).
Posted by Jim McClureJune 11, 2019June 13, 2019 Archives, all posts, Black history, Explanations/controversy, Local journalism & Web, Local landmarks, Unsung/obscure sites

For the York Daily Record

Kelsey Wisman grew up in York County and just completed her fifth year of teaching at York Tech.

So she’s no newcomer to York County.

But she was unaware – until recently – of the York race riots in the summers of 1968 and 1969, a painful community moment that some believe disrupted the racially oppressive status quo.

“It seemed to be something forgotten,” she wrote in an email, “and I wanted to educate myself and become more aware of our local history.”

She felt it important that her sophomores know what happened locally so, among other things, they could relate it to America’s story.

So she developed a tool to use in teaching local history – and has made it available to help others do so.

As part of her master’s work at Southern New Hampshire University, she created content for an app that allows people to walk, or virtually tour, a dozen sites related to the buildup to the riots, the unrests in 1968-1969 and the aftermath.

It is a positive sign that a teacher is deepening her own understanding and investing considerable time in helping others learn about the long-term oppression and racism that led to the riots of the late 1960s.

Wisman continues to add to the app, which she named “The Predictable Past: The York County Race Riots.” She also built a complementary website.

A dozen local sites are on the app telling about the unrest that involved much of the western part of the city.

Penn Park, site of a clash between black youths and police in 1968, the North Newberry Street site where Lillie Belle Allen died in 1969 and the East King Street site of the York Charrette are among those on the tour.

As her class worked through the tour in the classroom, Farquhar Park generated discussion among Wisman’s students.

Many students said they had seen the monument consisting of two benches remembering Allen and Officer Henry C. Schaad, who also died in 1969. But they never knew why they were there.

“Many students were shocked that the benches are the only item in the city to memorialize what happened,” she wrote, “and that those benches did not include any further information such as a plaque.”

Comments from her students while engaged in the classroom exercise using the app were valuable to Wisman.

“They were able to apply what we learned about the Civil Rights Movement to our area,” she wrote. “Their reflections also showcased their ability to apply past events, world events, etc., to understand the events that took place here.”

She is hoping others use the tool she developed to enhance the teaching of inclusive local history.

Kelsey Wisman’s emphasis on sharing her work prompted me to think about another type of digital sharing: using Facebook.

About a year ago, a couple of York Daily Record editors met with community leaders. Toward the end of the discussion, I urged them to more expansively use a Facebook best practice to enrich community conversation.

I noted most organizations and businesses devote their Facebook pages almost exclusively to news about their own organization. So they reach only their own loyal readers in this siloed practice.

What if community organizations shared the salient posts of other groups – good news about a new industry coming to York County or an organization gaining a major state grant – on their Facebook pages.

If the leading organizations in the community were to share the wins of others – and even the challenges facing the community – then their loyal readers would be better served. Audiences will grow because then they know they’re now seeing a broader array of stories.

The YDR practices what it preaches in this regard, sharing content from other community sites on Fixing York, Retro York and its other digital platforms to complement the news organization’s own stories.

I think many iconic organizations and their audiences are missing important conversations in town by not posting the content of others on their sites.

I checked the sites of the organizations presented by two of the YDR’s visitors, going 20 deep. One site was posting only its own promotional items, and the other was 90% focused on its own organization. So I’m again raising this idea.

Some organizations are puzzling how to get out unified messages – say, in moments of blatant racial discrimination – to improve and build our community.

Here’ a suggestion that could be implemented tomorrow: Develop plans to share the best posts of others on your organization’s Facebook page and other social media.

From Kelsey Wisman: You can download the app onto a smartphone from the app store or Google Play store. Once in the store, search PocketSights Tour Guide and download the app. Once you have the app, it will use your location services to find local walking or driving tours in your area. This particular walking tour, The Predictable Past: York County Race Riots, should display on the opening page. From here, you can then click on it to explore further or as you mentioned above, you can also explore the online version: https://pocketsights.com/tours/tour/York-The-Predictable-Past%3A-The-York-County-Race-Riots-2633.

Jim McClure will present on the topic “20 fascinating things about Manchester Borough and its region, past and present,” as part of that town’s 150th anniversary observance. He will present at 10 a.m., June 22, at the Manchester Fire Company.

Later that day, Scott Mingus will talk about “Confederate troops through Liverpool Post Office (Manchester) area.” That presentation is set for  7 p.m. at the fire company.