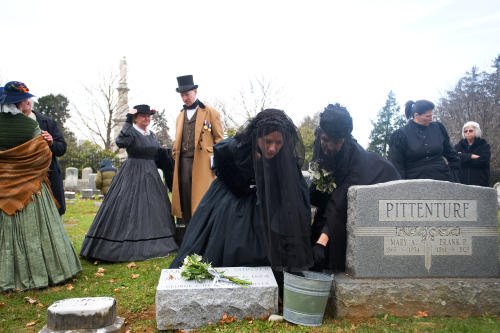 Lori Berlich, left, (Hettie Shriver), and Bailey Berlich (Mollie Shriver) are seen near Sadie Shriver’s headstone.  Sadie, who witnessed the Battle of Gettysburg, died at the age of 18 after the war and was buried without a tombstone. Also of interest: Hanover Civil War story stop: ‘Mother Loses Two Sons to War’ and Civil War affected women, Part I.

The Civil War had a profound – and often overlooked – impact on women and families.

So, when that impact is observed, I try my best to put it under the spotlight.

Such was the case in reading a story in the Hanover Evening Sun titled: “Woman no longer forgotten/Sadie Shriver, an eyewitness to the Battle of Gettysburg, died at age 18.”

The topic of the story, Sadie Shriver, was 7 when the battle raged around her. Image her thoughts, the  impact on her short life of such an occurrence.

Think about that when reading the story, excerpted here:

Women are walking, holding flowers, with their hoop skirts hitting the fallen brown leaves on the ground.

Men in top hats, staring straight ahead under the gray November clouds.

Slowly, the crowd moves to Evergreen Cemetery in Gettysburg on Sunday morning. And around the gray, faded tombstones, they gather.

More than 130 years ago, this is how the loved ones of Sadie Shriver might have said goodbye to her. But when her family buried her, one thing was missing — a headstone.

This was a young woman who came from one of the oldest families in Adams County, Nancie Gudmestad, director of the Shriver House in Gettysburg said. A little girl who kissed her father, George Shriver, goodbye as he rode off to war. An eyewitness to the Battle of Gettysburg when she was just 7 years old. And when she was 18 years old — two weeks before her 19th birthday — she died from tuberculosis and was laid to rest in Evergreen Cemetery.

Yet — for some unknown reason — her grave has been unmarked since she died in 1874.

On what would have been her 156th birthday, a ceremony was held to unveil a headstone at Sadie’s grave. A funeral procession with a couple dozen people, including re-enactors, traveled from the historical Shriver House on Baltimore Street to the cemetery.

So, they gathered around Sadie’s grave. And spoke of how she must have seen the bloody, wounded soldiers during the battle. How she heard their last cries for help before they died. How she smelled gun smoke in the air.

And among the crowd were some distant relatives of Sadie.

A few years ago, Diane Weikert Dolan, of New Jersey, visited Gettysburg and toured the Shriver House. And when she started to hear the stories of the Shriver family and Sadie’s mother — Hettie Shriver, whose maiden name was Weikert — it all sounded familiar.

“They started telling me my family history,” she said.

Scores of previous Civil War posts on this blog.

All women in York County posts from the start.