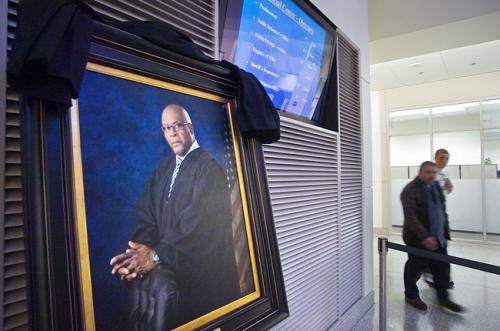 Marked with bunting, Judge Chuck Patterson’s portrait is displayed in the York County, Pa., Judicial Center’s lobby. Judge Patterson died this week. York County Common Pleas Court judges receive such official portraits. Judge Patterson’s funeral is set for Saturday. An overlooked point in assessment of Judge Patterson’s service on the bench: He handled primarily cases involving juveniles, where terribly difficult cases are judged. Many of the proceedings of the court, by law, are held outside the public view, meaning service there can be overlooked. ‘He was really interested in kids,’ Barbara Lee Krier, a longtime juvenile public defender, told the York Daily Record/Sunday News. ‘He was concerned about their futures, and he would tell them that.’ (See another view of the potrait below.) Also of interest: Links about the life and death of Judge Chuck Patterson.

FlipSide magazine reported about a recent screening of the movie at York College, with Dodson in attendance:

“The movie doesn’t show papers flying or people screaming amid a market meltdown. Dodson, who spent time on trading floors to research the movie, said those things rarely happen in real life, so they don’t happen in “Margin Call.”

Mag spread: WITF’s Central Pa. Magazine produced excerpts from “Civil War Voices from York County, Pa.” in its current edition. That might have spawned a query from a Lancaster resident: Do you plan “Voices” in hard cover. Co-author Scott Mingus answered that none are planned. See you at our booksigning at Bookland in York from 11 a.m. to 1 p.m. Saturday?

Recommended forum of the day: BAE, a major York County employer, had a recent “Second to None” rally, and people are commenting about it on The Exchange. 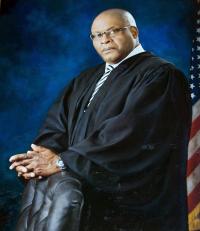