Of York County elections of years past, Bury burgers and Goodling apples 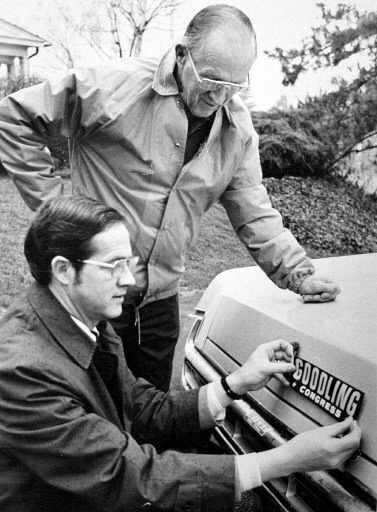 Bill Goodling, with his father, longtime U.S. Congressman George Goodling, readies a mobile marketing campaign for his first federal political bid in 1974. Bill Goodling went on to a long tenure in the U.S. House, where he became a ranking member. George Goodling, in his days in the State House and then U.S. House, created an election day custom: He would bring a bushel of apples from his Loganville fruit farm for employees at York’s two newspapers, The Gazette and Daily and York Dispatch, according to columnist Jim Hubley. Also of interest: In a hard-fought race, York’s Mayor Huggy regained his seat in 1923.

– The Dispatch would announce election night results from its second story newsroom on East Philadelphia street.

The Republicans flocked there.

The Democrats would gather outside The Gazette and Daily on East King Street where a large screen was erected on the York City Laundry Building across the street. The newspaper would flash election results on that screen.

In 1940, Hubley prepared the slides at The Gazette and Daily, but four years later, the show did not go on. It was wartime and large crowds were banned.

By 1948, television was becoming a force and the slides, and the TV tube replaced the City Laundry screen.

But technology again has changed things. People can sit at home and see real time results on their computer – at ydr.com, for example – faster than TV can broadcast.

– An election night tradition at The Gazette and Daily was the delivery of Joe Bury’s hamburgers to the newsroom.

“Near midnight a Bury employee would bring the treat and we felt like we were receiving a huge bonus,” Hubley wrote.

– The 1944 election was particularly memorable for Hubley. Republican Chester Gross beat Hubley’s boss, J.W. Gitt, for a seat in the U.S. Congress.

George Goodling, who customarily brought in apples on election nights, was the other winning Republican that year.

“We consoled ourselves by eating George’s apples,” Hubley wrote.