In hard-fought campaign, Mayor Huggy regained his mayoral seat in 1923 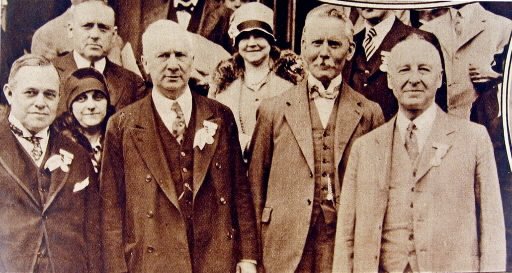 York, Pa., Mayor E.S. Hugentugler, second from left, is pictured with prominent folks at the massive 150th anniversary celebration of the adoption of the Articles of Confederation in York in 1927. Others, from left: S. Forry Laucks, chairman of the celebration committee;  Ex-Lord Mayor Henry Rhodes Browne of York, England, and Governor Fisher, of Pennsylvania. Hugentugler was serving a third term as York mayor, won in a hardfought contest four years before. Also of interest: Check out these updated lists of pioneering York County minorities, women.

Sleepy, that is, until York’s longtime Mayor E.S. Hugentugler decided to run again.

The late York Daily Record columnist Jim Hubley told the story in a 1995 column, at a time that independent candidates were being mentioned locally or nationally.

The story goes to show that any election, however tame and seemingly uncontested, can become significant if people decide to take the risk and run for public office.

Rumors of an independent assault at the general election have been fluttering around.

At the time this is being written, no formal announcements have been made, but there are indications someone may try to buck the odds and take on a primary winner at A large number of both county and city offices were up for grabs that year, not the least of which was that of mayor of the City of York.

Colorful Republican Ephram S. “Huggy” Hugentugler was completing his second term as mayor and both friends and foe were wondering if he would seek a third term.

On the surface, there appeared to be little interest in the election by countians who were wrestling over three more important issues of the day: a fight between the City of York and the York Water Co.; the influx and influence of the Ku Klux Klan; and the effect, if any, women voters would make with their newly acquired suffrage.

State Auditor General Samuel S. Lewis, the recognized Republican “boss” of York County, stunned the populace with the announcement that, for him, “Politics had been adjourned for the year.” Few believed him, but as things developed, Lewis kept his word and evidently kept his “hands off” the campaign.

Primary voting was in September that year. And when August rolled around there were no official candidates for the office of mayor. All possible candidates were waiting for word from Huggy, who remained silent, seemingly indifferent.

On Aug. 15 Huggy announced that he had yielded to the wishes of friends and would seek a third term.

The next day, the equally colorful York automobile dealer, James W. “Bill” Richley, announced he would challenge Huggy for the Republican nomination.

Within days, four candidates filed for mayor on the Democratic ticket. The battle was on, with Bill and Huggy going at it tooth and nail until Primary Day, Sept. 11.

There were three days of voter registration prior to the primary election. And Yorkers were surprised when priests at local Catholic churches urged their members, particularly women, to register and vote. Priests denied they had been influenced by antics of the anti-Catholic KKK. But the weight of their votes became a big factor at the polls.

Richley upset Huggy, but the result was not declared official for two weeks, as friends of the mayor claimed foul and fraud. Finally, election officials ruled Richley had received 4,030 votes against Huggy’s 3,507 and would face his warm personal friend, former district attorney C.W. Albert Rochow, the Democrat candidate in the general election.

The next day Huggy produced his petition seeking a spot on the general election ballot as an independent on the “Citizens” party ticket.

Once again it was a duel between Bill and Huggy with Rochow running third. The lively contest became bitter and acrimonious, but when the official ballot count was approved Huggy had won with 5,809 votes against 4,612 for Richley and 3,860 for Rochow.

The “independent” had triumphed.

So, dear readers, there is a York precedence for a successful independent political candidate.

But one thing still baffles me about that 1923 mayoral race. Before Huggy announced his candidacy, a group of citizens was trying to induce a former York mayor to seek the office again.

Those citizens put forward as their candidate’s top qualification the fact that he once “undertook a scientific solution of the problem of prostitution.”

I wish someone would explain that one to me.

For more examples of Jim Hubley’s work,  follow these links:
– ‘We would ‘hex’ them if they ignored us’
– Giving news, sports junkies their fix
– Bury’s burgers: ‘That was it — no slaw, no relish, no pickles’.
– ‘That’s a stupid question;’ Brooksie played second base.
– Butch Wynegar ranks bright among York’s sports stars.
– York County, Pa.’s Cameron Mitchell agonized over career choice
– Playland plays nostalgic note for York countians