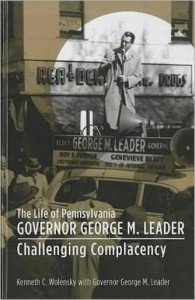 A new book tells about the life and times of former Pennsylvania governor and York County native George M. Leader. Leader, the second youngest governor in state history, served one term in the middle of the 1950s. ‘It’s something I enjoyed doing very much and he’s an interesting subject to write about,’ author Kenneth Wolensky said. ‘He’s 93 years old, he’s in very good shape, he’s sharp and lucid, he remembers things in great detail.’ For details, see: Book recounts life, career of George Leader. Also of interest: List of luminaries with Dover-area links lengthens with addition of George Leader

Remember the National Christmas Tree that blew over earlier this year?

That was the tree that causes such annual ceremony, the one that the president lights every Christmas.
Wind gusts of up to 50 miles per hour took down that towering evergreen.
Recall that it was from York County?
Originally, that tree, possibly now mulch, came from William E. Myers of Shiloh in 1978. He sold his 15-year-old, 30-foot Colorado Spruce to the National Park Service that year.
Well, York won’t get a second chance to provide this national treasure, at least not for several decades. A new tree has been planted.
Contrast that view of making a national treasure, well, almost ever green, with the life and times of the U.S. Capitol Christmas Tree.
That’s a lesser-known cut tree ported in from a different state every year.
The call went to Sonora, Calif., this year.
“A 65-foot white fir tree selected as the U.S. Capitol Christmas tree was cut down and removed from a picturesque setting in the Sierra Nevada mountains on Saturday,” AP reported, “then loaded on a truck for a 4,500-mile journey from Northern California to Washington, D.C.”
Think of all the savings if foresters could have checked out nearby York County’s abundant evergreens for a transplant, rather than a cut, prospect.
And to reinforce the point that worthy evergreens do grow in the eastern United States, Rockefeller Center procured its 2011 tree from Pennsylvania, not California or some other faraway place.
AP reported that a small-town spruce from northeastern Pennsylvania was cut down and shipped to New York, where it will be lit up today.
What’s the point of all this?
This rite of December in which our nation comes together to celebrate the season’s message of peace is right and proper – both with the National Christmas Tree and its counterpart on the U.S. Capitol lawn.
No Grinches here.
But doesn’t it show some form of lavishness or wastefulness in these hard times — even if much of the cost is donated — that we must go all the way to California to cut a Christmas tree?
Interesting, that it’s the congressional tree that is cut and shipped in from who knows where?
Must the tree be viewed as a beacon to entrenchment and entitlement?

Blog post of the day: Fate of Camp Security Prisoners Important to Commanders.

Forum of the day: Exchangers are discussing a relative newcomer to southeastern York County – CAFOs.