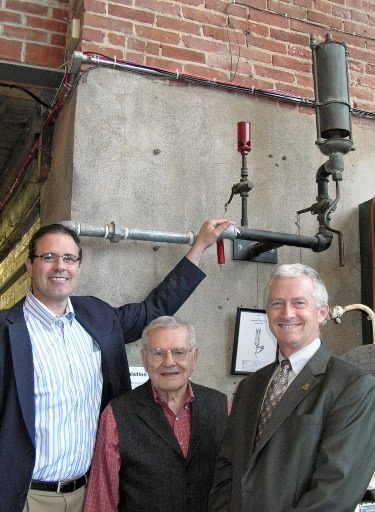 New York Wire is reportedly closing, and it’s too early to tell about the fate of its old factory whistle, instrument used for the annual Christmas concert. But if the concert is no more, will you miss it? Should the whistle be moved and the concert played elsewhere? Please comment below. But have you ever wondered what the New York Wire whistle, hidden from plain view atop the factory, looks like? Jon Raab, Daniel Meckley III and Jeff Hines, principals in finding the way to fund the annual concert, stand in front of a whistle at the Agricultural and Industrial Museum. That whistle is identical to the New York Wire whistle. (A report later in the day indicated the factory whistle concert, indeed, would continue.) Also of interest: New York Wire factory whistle, shift workers and children: Does the noise disturb them?

Many digital readers don’t go to this blog directly to find such stories. You prefer that I deliver the stories to you via social media, a little like home delivery of the newspaper.

These social media posts sometimes raise issues or ask questions that are different from what I write here. To give you a flavor, here are 10 such Google+ comments, edited and adapted for this column, starting with the most recent post about the clouded future of the New York Wire factory whistle concert:

1. With the reported closing of this longtime New York Wire factory, we must remember good folks will be losing good jobs: Still, one must ask, what will become of the internationally factory whistle concerts each Christmas Eve? Feel a little guilty even asking.

2. Public smoking bans: Interesting that York County has come all the way from blessing the cash business of cigarmaking to banning smoking in many public and public-funded places, all in 100 years.
3. Stewartstown Railroad’s fate still uncertain. When reading about this group and the Ma & Pa’s Railroad/Muddy Creek Forks restoration efforts, I always marvel at the commitment of rail buffs, many spending every weekend working on the railroad.
4. So in munching two Bury’s burgers from different stands at the York Fair, I noticed one or both left a memory on my white York Daily Record shirt. Three red sauce-colored spots right near the YDR logo. I went to a restroom to attempt to sponge off the stains because I had to work the NewsVroom booth. But I did so for a sec and stopped, realizing that those stains were a mark of sorts. I had eaten my favorite food at the York Fair. Those stains were a proud badge to mark that occasion, not to sponge away. (No NewsVroom visitors mentioned the stains.)
5. A Hanover businessman won the Electric Map at auction and plans to install the former Gettysburg icon in Hanover as a tourist attraction. Imagine that: The Electric Map lives on in York County.
6. Lafayette Club of York is shutting down. Big question. What will become of those lovely murals on its walls?
7. There’s a neat story about Foustown, near Cousler Park — not to be confused with the smokestack-damaged Foustown near Glen Rock. One time, Scott Fisher, our opinion page editor, found pieces of pottery near the northern Foustown. This testifies to the Pfaltzgraff pottery that operated there in the mid 1800s. Love that stuff.
8. Old York City Hall’s transformation into a police station is in the news. Someone brought up the argument on Facebook that such renovation is good for tourism. Tourism? Who would ever visit a police station, voluntarily? “The argument for tourism being boosted is insane,” one fellow commenter responded. The YDR’s position? Renovate it, maybe five years from now. You just started paying for a new city hall.
9. Delaware’s campaign that it offers more than beaches reminds me that it has recognized James Smith, York’s Declaration of Independence signer. Smith’s name is on the side of a dormitory. None such in York County, though.
10. Starbucks. Thinking the other day about how few people know the plant in York County roasted the beans for that cup of Joe. Then the YDR ran a story today about a former tester there who now has her own roasting site. I don’t think there was mental telepathy at play here. 
 