Neil Young did not play York, but model trains have brought him here 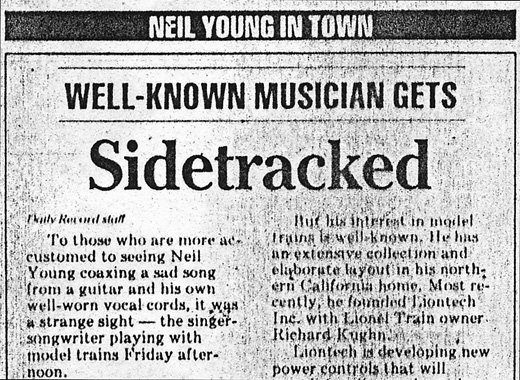 Famed singer-songwriter Neil Young has visited York for the large model railroad shows held here twice a year. This York Daily Record newspaper clipping from the early 1990s tells about such a visit. Also of interest: Check out these stories and photographs of famous visitors to York County.

Bruce Springsteen fans and music enthusiasts are remembering “The Boss’s” appearance in York in the 1970s.

“It doesn’t look like Neil Young was with Crazy Horse in 1972, but that would have been one heck of a show for York College to land – The Boss and Neil Young!”

“There is a possible Crazy Horse-Springsteen connection, however. Nils Lofgren had been a member of Crazy Horse and continued to record and make spot appearances with the group even though he had formed his own band in 1972. Like Whitten, Lofgren was (is) a guitarist. Did Lofgren fill in that night for the departed Whitten? Was he on the same bill with Springsteen? Maybe, maybe not. We don’t know. What we do know is that Young and Lofgren remained close to the band even when they weren’t officially part of the band. We also know Young and Lofgren continued to work together during this period.

“In 1984, Springsteen asked Lofgren to join the E Street Band. Did the two first connect that night in York? Another history mystery.”

Maybe someone can shed some light on this one.

Neil Young was, indeed, in York in the early 1990s. There have been reports of Young sightings many times over the years, always associated with the bi-annual model railroad shows at the York Expo Center. Only one time was documented – in 1994.

Unfortunately, the model railroad enthusiast did not consent to an interview.

“To those who are more accustomed to seeing Neil Young coaxing a sad song from a guitar and his own well-worn vocal cords, it was a strange sight the singer-songwriter playing with model trains Friday afternoon.

“No, Young wasn’t playing. It’s a serious hobby with him, and it’s a business venture with a personal stake. Young is attending the Train Collectors Show at the York Fairgrounds this weekend.

“We ran into him while he was trying out a remote-control train rig at one of the many manufacturers’ displays at the fairgrounds. Young politely declined an interview.

“But his interest in model trains is well–known. He has an extensive collection and elaborate layout in his northern California home. Most recently, he founded Liontech Inc. with Lionel Train owner Richard Kughn. Liontech is developing new power controls that will permit handicapped people to operate model trains. Prototypes of the company’s controls are on display at the fairgrounds’ show.

“Young’s two sons, Zeke and Ben, have cerebral palsy and Young invented controls that permit his kids to share in his hobby. The Train Collectors show, which concludes today, is open only to members of the association.”

Maybe someone has talked with Neil Young in one of his visits to York? If so, please comment below.