Thanksgiving in York County, Pa., 2011: Peace after the storm 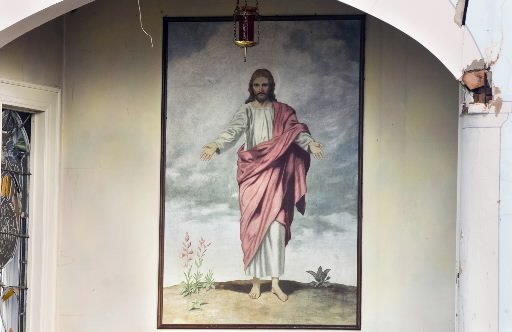 This is the Shenberger’s Chapel chancel painting that survived the 2009 blaze at the Chanceford Township Church. The Rev. C. Guy Stambach was the painter, and many of his works appear in sanctuaries throughout York County and beyond. This artwork has special meaning for the congregation, which rebuilt its damaged church, and then some.  (See an additional work by the ‘Painting Pastor’ below.) Also of interest: ‘Painting pastor’s’ work survives devastating southeastern York County blaze at Shenberger’s Chapel.

Interestingly, the peaceful day of Thanksgiving Day can bring conflicting thoughts.
The tougher the treading in the 12 months between Turkey Days, the more we give thanks in adversity’s aftermath.
Consider the stories today in the York Daily Record/Sunday and on ydr.com. The newspaper and website is filled with tales of those who are overcoming the fallout from ill fortunes in 2011 or in previous years.
We experienced tornadoes and floods and fire and rain.
Sometimes, people rebuilt on their own. Others received a big help from friends. Sometimes, whole communities chipped in.
+++
Thanksgiving is based on the belief that good can come from adversity.
So the Pilgrims and subsequent settlers praised God for bountiful harvests. In contrast, they had experienced bad growing seasons.
And the Continental Congress, meeting in York, officially and profusely thanked God for badly needed success in battle against the British in the American Revolution. The patriots had seen little success on the field before the Battle of Saratoga, N.Y.
We are blessed as a people and as a nation.
Still, we look back over the past year, and it’s tough not to question: Wonder what’s going on.
Four tornadoes touched down here. We almost never have tornadoes.
And earthquakes.
Earthquakes?
History teachers us that weather can be perverse and adverse.
In February 1822, up to 20 inches of snow fell, followed by heavy rain and flooding.
And then no rain until September.
All this came only five years after the 1817 flood, the deadliest on record in county history. Ten people died that year.
More recently, Tropical Storm Agnes caused millions in property damage in 1972 – and more importantly, its waters took the lives of at least five people.
Then, just months after Agnes, came a late October snow, something we also experienced in this bizarre weather year.
+++
Several points here:
History helps us to remember that we have, literally, weathered hardships.
Secondly, we should be thankful even when we’re spared adversity, when we’re not up against something.
And there must be perspective.
Despite these tough times, many people enjoy good jobs, fulfilled family lives, full stomachs (particularly today) and look forward to a rich shopping experience on Black Friday.
+++
One of the stories in today’s newspaper tells how the congregation of Shenberger’s Chapel United Methodist Church came together after a fire leveled their Chanceford Township building in 2009.
A painting of Jesus behind the altar, created there years before, survived the blaze.
The restored artwork — one of the Rev. C. Guy Stambach many paintings — will hang in the new Water’s Edge United Methodist Church in New Bridgeville.
The story tells how the painting has great meaning to members of the congregation.
They are not alone. The have seen that God is by their side — that through adversity, comes Thanksgiving.

Read more about how the congregation has rebuilt after the Shenberger’s Chapel fire. 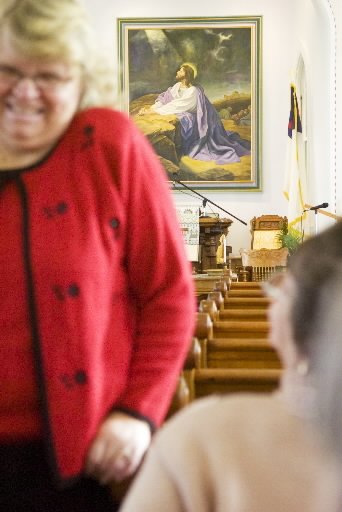 The late Rev. Dr. Guy Stambach worked on oil paintings in about 30 churches in Central Pennsylvania. Zion United Methodist in Windsor Township, seen here, and other churches have hired artists to restore the half-century or older works.