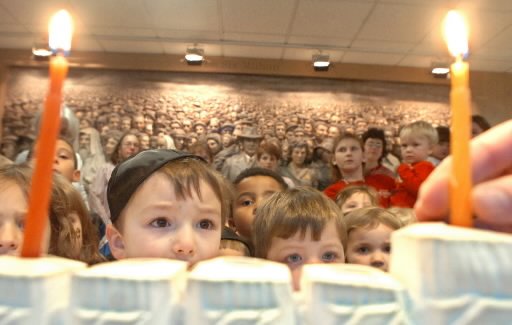 Members of the Jewish Community Center participate in the lighting of the first candle to recognize the beginning of Hanukkah in December 2006. “The Six Million” sculpture can be seen at rear. Background posts: Holocaust sculpture a York County must-see and Images capture hope for racial harmony.

– That the first Jewish resident appearing in York history came in 1755. Later, this citizen, Henry B. Franks, became a naturalized British citizen.
– That by 1773, Jewish merchant Elijah Etting and his wife, Shinah, were prominent in York. Alexander Graydon, studying law, said this about Shinah Etting, “… there was but a single house in which I found that sort of reception which invited me to repeat my visit; and this was the house of a Jew. In this I could conceive myself at home, being always conceived with ease, with cheerfulness, and cordiality.” (After her husband died, Shinah Etting moved to Baltimore, where she became matriarch of a prominent Maryland family.)
These facts are part of the JCC’s “From Generation to Generation,” published in 2000, available via the York County Library System. (I’m on a campaign to bring older, but useful publications to public view.)
The publication is filled with historic pictures of that agency’s first 90 years.
In fact, it wouldn’t be surprising if planning is under way for a 100th anniversary edition.
The 140-page book contains other intriguing details, including how this major community agency formed in the first place:

The first Jews arrived in North American in 1654, but it was not until 100 years later that a Jewish presence was established in Colonial York, Pennsylvania. And that presence was only for a brief time.
The modern York Jewish community traces its roots to the mid-19th century and the arrival of families from Europe.
By 1910, there were three distinct Jewish congregations.
What was missing was one place — a common ground — where all the Jews in York could come together without the labels of Orthodox or Reform. A place that would provide a sense of belonging…a spirit…a camaraderie.
That concept gave birth in 1910 to the Young Men’s and Young Women’s Hebrew Association, later to be renamed the York Jewish Center.