Cobblers in York: ‘There’s still a need for us’ 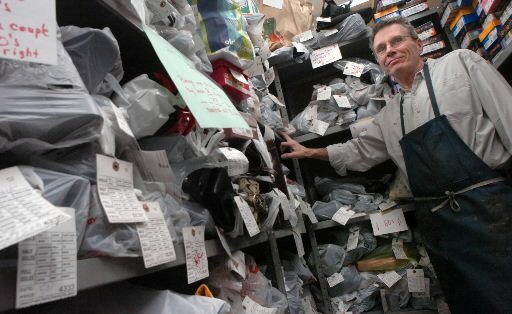 Bob Reineberg is servicing customers of the now-closed Rapid Shoe Repair of York. Reineberg, whose family is synonymous with shoes in York, is doing this as a favor to the former owner of the South George Street store. Background posts: ‘It’s something you can’t experience at a store in the mall’ and Landmark Futer Bros. building in new hands.

The close of Rapid Shoe Repair at 201 S. George Street represents more than just another closed downtown retail business.
Times are changing.
At one time, people would have had their shoes repaired. Today, they just throw them away or park them on a shelf… .

And Rapid Repair’s demise signals another sign of the times. Wing tips and other dress shoes that demand shines have given away to low maintenance types.
With Rapid’s closing goes that 15-minute shine.
Where do you go nowadays in York for a shoe shine?
The York Daily Record’s story (1/16/08) on Rapid’s closing follows:

Jill Johnson of Springettsbury Township stopped by Rapid Shoe Repair in York on Monday afternoon to get a pair of her shoes repaired.
Though a few lights were on inside the 201 S. George St. shop and a bright neon sign was lit in the window, when she tugged on the front door, she noticed a sign stating the longtime York cobbler had closed his business.
The signs in the windows all read the same thing: “Closed. You can pick up your repairs at Reineberg’s Shoes, 1031 Haines Rd. Must be picked up by February 16, 2008.”
Inside the shop, a few shoes appear to be tucked in cubbyholes behind the counter and the large shoeshine bench was still pressed against the wall, but little else remains.
Raymond Card, owner of Rapid Shoe Repair, declined to comment on why he closed. Sherman Property Management, which manages the building, referred all calls to Reineberg’s Shoes.
Card said he had been at the location since 1985 but was previously housed in the former L. Morgan Jewelers building on South George Street.
Bob Reineberg, owner of Reineberg’s Shoes and a fellow cobbler, said he found space in his cramped stockroom for Rapid’s repaired shoes until their owners can pick them up — with money for the repairs going to Card.
Reineberg said Card is the type of person who worked all day but would still find time to go out of his way to help people.
“He worked very, very hard,” Reineberg said.
On a few occasions, Reineberg said, Card fixed his shoe-repairing machines.
With the closing of Rapid Shoe Repair, Reineberg said there are few shoe-repair businesses left in York County, where the business once thrived.
Previous generations would rather have older shoes repaired than buy a new pair, Reineberg said.
“There’s still a need for us,” Reineberg said, “But it’s more limited.”
Johnson, who grew up in York, said she’d been to Rapid once in the past to have shoes repaired and a quick 15-minute shoeshine.
“It was always very good service,” Johnson said. “You don’t realize the advantages you have with stores like this downtown until it’s gone.”