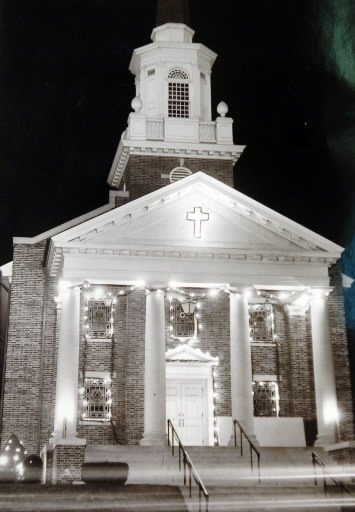 Advent Lutheran Church, decorated for the Christmas 1952 season, stands in this York County, Pa., Heritage Trust photo on the western edge of the East York Historic District, but for years it has been central to neighborhood residents as a church home and nearby gathering place. It was dedicated as the Chapel of the Advent during Advent season, 1924. When the cornerstone for this building was laid in November 1940, the East York development was about two-thirds built out. Also of interest: Plaid facade linked to Springetts cleaner’s roots.

I was thinking about that when listening recently to former Codorus Street neighborhood residents tell about their now-demolished block in the west end of York City.

Surely, part of it is telling and preserving stories about the place.

Which made me recall this York Sunday News column (10/1/06) that grew from my tour of another York-area neighborhood with a quartet of its former residents, who sang great tales about their childhood home.

For Dan, Lute, Bob and John, their high regard for old East York never fell like autumn leaves from the multitude of trees that line the neighborhood’s streets.
Memories spilled out during a recent tour of one of York’s first outer suburbs.
They told of planes swooping into nearby Fayfield Airport and hooking mailbags from a goal-post-like contraption without landing.
Nearby Mill Creek offered swimming. One time, a boy emerged from the water covered with leeches.
And even worse. After a swim, clothing changed color, thanks to outflow from the dye works upstream.
Near the creek sat a paper mill, now rotting on land at North Hills Road and Industrial Highway, where Rutter’s has proposed a convenience store. That mill created a stink comparable to East York’s outrage over the proposed Rutter’s.
Not that stores are new to East York. A couple of a home front stores operated in East York for years. One such storekeeper earned a wide reputation as a penny pincher.
A pond near the paper mill also created a hot spot for ice skating.
And near that pond, along the Pennsylvania Railroad that shaped the neighborhood’s north border, deep limestone caves invited exploration.
The railroad also attracted ragged hobos, who often took short cuts on the long sidewalks of the neat neighborhood.
But that rail line, plus the streetcar tracks that bisected the suburb in the middle of East Market Street, placed East York close to everything.
The trolley could take riders from East York to downtown in 10 minutes — and offered ample opportunities for mischief, to boot.
Many other observations tumbled from the minds of the four men during the 90-minute tour. When added to writings of others, a poignant picture develops about a treasured place that molded the lives and minds of many:
• The area between East Market Street and Eastern Boulevard is, indeed, part of East York. For those who lived there, Market Street caused no divisions. But those kids across the creek in Elmwood? Now they were the opposing team.
• Want to know East York’s original southern boundary? Just look at where sidewalks peter out as they run south toward Fayfield. Oh, did East York developer John Longstreet brag about these sidewalks and curbs.
• The neighborhood was home to a mixture of families. “Shoe Wizard” Mahlon Haines, Judges Robert Shadle and James E. Buckingham, Congressman E.S. Brooks, and William Penn Principal C.B. Heinly were among the luminaries who resided there.
Working-class folks and budding execs lived there with the industrialists. There’s a story about Stewart Lauer, president of York Corporation, going to work in the morning, as did Kenny Mundis, a Civilian Conservation Corps employee.
• East York’s varied stock of more than 300 homes rising between 1903 and the 1950s had a common restriction: They should reach at least two stories. But one-story houses occasionally flew under the radar. This unintentionally added to Longstreet’s vision of a neighborhood where modest homes would neighbor mansions, mill workers living next to managers.
• A half-dozen or more Jewish families planted deep roots in East York. The Millers, Levins, Chocks, Wagenbergs, Erdoes and others became part of the community. Sadly, with all the neighborhood’s eclecticism, black people could not find homes there. In fact, race restrictions were written into deeds in the 1940s, though courts later ruled against such language. In recent years, about 1 percent of the neighborhood is counted as black.
• Yard signs mark the pending battle between GOP incumbent Todd Platts and Democrat Phil Avillo, two of three candidates for Congress in November. But it’s also a fight for neighborhood bragging rights between Platts, who grew up in East York and operates a district office there, and Avillo, a veteran neighborhood resident.
• The old Keesey farmhouse that supplied the land for Longstreet to develop in 1903 stands today as a private residence. So does the farm’s former barn. That’s the old structure that North Hills Road motorists almost scrape as they near Industrial Highway.
+++

If Advent Lutheran Church provides a gathering place for the community today, it was the Hiestand School that drew together folks from 1912 to 1978.
The tour led by Dan, Lute, John and Bob included a stroll through their old school — a brick building named after community leader John S. Hiestand that expanded from two classrooms to six as the community swelled.
The school was part of an independent school district that later transitioned to York Suburban. High-achieving Suburban helps the community to renew itself by attracting newcomers as the old guard changes.
To former students, the school sparks additional memories: Flies in inkwells, chewing paper, chomping gum, getting paddled, a teacher who never discovered deodorant.
Left-handed-hitting Dan became known at the school’s playground for stroking balls against a house that still stands today despite this barrage.
The East Enders developed prowess on the diamond. Later, when they matriculated to Phineas Davis, they initially were viewed as the sissy kids from East York.
But when they took the field early that school year, they hit like heroes.
“The other team never got to bat,” Dan said.
Hiestand closed with the opening of East York Elementary in Haines Acres. Today, the building incubates churches rather than students. Living Word Community Church, the megachurch near Red Lion, was one such house of worship that met there.
Some years ago, Lute helped organize a Hiestand School reunion in York.
“How fortunate,” Mimi Ramsey Wintersteen wrote for the occasion, “we were to have grown up in such an idealistic environment.” Writing in
Writing in the East Ender, co-editor David Levin playfully opined that seventh graders didn’t “give a rap” about what happened to eighth graders moving on to Phineas Davis.
But, the soon-to-be-ninth grader wrote in the school newspaper’s final edition of 1937, “We hope we will all be successful in the next world . . . .”
The wish came true.
East Yorkers quickly point out that the neighborhood and its school deeply shaped their lives.
Levin went to Harvard and became an English professor at the University of Virginia.
His co-editor, Daniel G. Meckley III, or Dan the tour guide, became a corporate CEO and York community leader.
Lute, Dr. Luther B. Sowers, served as a York County school superintendent and consummate community volunteer.
Bob, Robert S. Bowers, became a teacher and coached football and other sports.
And John, Judge John C. Uhler, has presided at some of the most significant trials in York County’s judicial past.

Also of interest:
A layout shows the developer’s plans for East York in 1903. The plan covered the north and south sides of Market Street and extended west, past Rockburn Street toward present-day Advent Lutheran Church. Today, East York — East York Historic District, as the National Register calls it — is bounded by Oxford Street, Wallace Street, Royal Street and Eastern Boulevard. 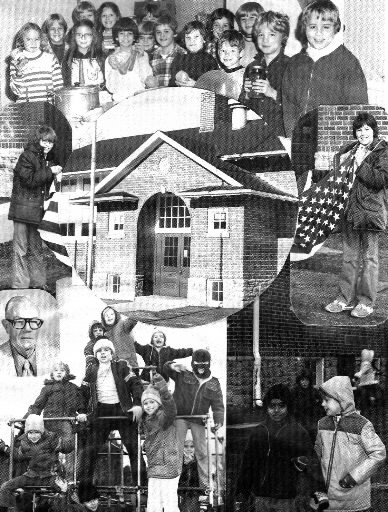