The Foodstruck event the other day was successful in every respect. Just the 8,500-plus who made it there to munch on the Foodstruck fare made it so. Beyond the obvious, the event helps underscore a change that has been taking place in recent years in York, Pa. As the following photos show, the event brought swarms of people to the Arts District, scene of many downtown festivities nowadays… .

Not many years ago, an event like Foodstruck would have been positioned in and around Continental Square. Remember the NASCAR shows under the Robertson Administration? The square, center of community life for decades – centuries – is targeted for revitalization, but empty storefronts await visitors there. Meanwhile, construction of the York County Judicial Center, Santander Stadium, the twin Susquehanna Commerce Center towers and the potential of the Northwest Triangle have formed a gravitational pull on community life and events to shift west and north. Also of interest: A 1960s view of Continental Square from the air.

Two factors aid the Arts District – or Market District – in and around Beaver Street, where events tend to be centered in recent years. First, Central Market forms an excellent anchor and creative uses for the 126-year-old landmark are just now being imagined. Secondly, the area has historical attractions to offer visitors. Here, the York County Heritage Trust’s 200-year-old Barnett Bobb Log House forms a backdrop for Foodstruck goers. It’s interesting that Foodstruck organizers did not choose Beaver Street as the event’s epicenter. The short answer is that the event would have been too big for the confined street and people would have spilled out each end – a nice problem to have. Also of interest: Central Market should be used for all kinds of things. 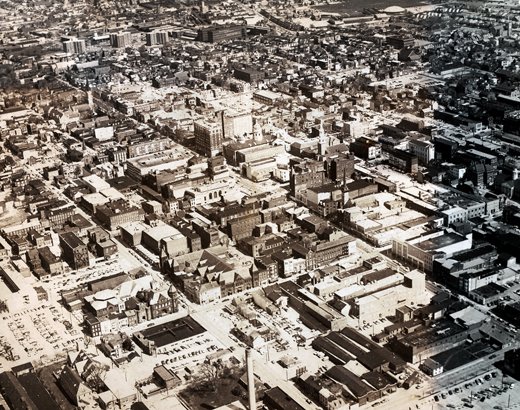 This 1960s aerial view give the birds-eye view of the relationship between Continental Square top, center, and the Arts District and the Pershing Avenue area where the Foodstruck event took place, lower right. Community life seems to be moving toward the gentle sucking sound of the Codorus Creek, outside this frame at bottom right. This move has all kinds of implications for York. What does all this mean for businesses and institutions to the east and south? The Yorktowne Hotel, for example? Would Continental Square revitalization complement the arts district growth or should those resources be poured into the Arts District to ensure its success? The best answer might be both/and. The Arts District, as it expands, must have fit districts ready to receive it. For a fuller discussion on this move to the west and north, see: Art & Soul, from the air.