Farmer with about 6 years of schooling never missed Meet the Press: Linked in with neat history stuff, Feb. 16, 2012 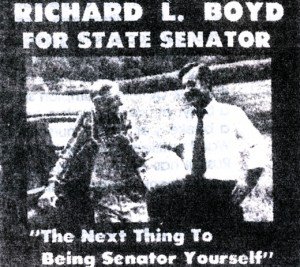 Codorus Valley Chronicles carried an informative article in its February edition about York County Labor Leader Richard Boyd’s bid for a State Senate seat some years ago. The photo, from this newsletter of the Codorus Valley Area Historical Society, shows Dick, right, conversing with his Glen Rock neighbor J. Gilbert Thompson. Actually, Dick seems to be on the receiving end. Bachelor farmer Bunt Thompson had about six years of schooling but never missed ‘Meet the Press,’ the newsletter stated. Like Thompson, many York countians, with one-room school educations that ended short of high school degrees, are informed and engaged. Interestingly, Thompson’s farm is now owned by current State Senator Mike Waugh. As for Dick Boyd, listed as the speaker at the society’s February meeting, the newsletter said: ‘If anyone can say he has been there and done that, Dick surely qualifies for that title.’ (Click to enlarge image.) Also of interest: Dick Boyd’s ‘The Bridge’ marks the spot along the Codorus.

For more, check out : Old birth, death records  over at Record Tracker.

Abe is back: The statue of Abraham Lincoln returns to Gettysburg’s square after getting spruces up.

Forum of the day: Exchangers are commenting on the massive turbine making its way through York County to the Holtwood Dam hydroelectric plant in the Susquehanna River.

*For contact information about the newsletter, check out Codorus Valley Chronicles.