11 questions and answers to prove your York County war smarts 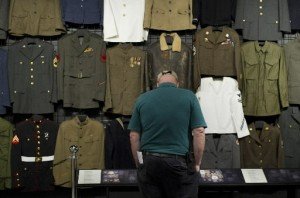 Springettsbury Township’s Lee Davis peruses military coats in the ‘Front Porch to Front Lines: York County Goes to War’ exhibit at the York County Heritage Trust. The quiz below can be used by exhibit goers to sharpen their eye for details. (Click of photograph to enlarge.) Also of interest: John Carter family from York saw six sons serve in World War II uniform and 20 questions and answers to prove your York County World War II smarts.

The 30-something members of my OLLI class made up of interested 55-year-old-plus men and women will tour the York County’s Heritage Trust’s “Front Porch to Front Lines” exhibit next week.

I prepared a question-and-answer sheet for class members, which I share here. You might know many of the answers from your general knowledge of World War II and other 20th-century wars. Many of these points are covered in yorktownsquare.com’s war category.

See how you do:

1. This young woman from York County part of the exhibit because she died while working for the YMCA in World War I.

2. Whose head was on the receiving end of the hammer in World War I?

3. This decorated World War II officer was  sentenced to death in the Korean War for disobeying a command. Who was this longtime York resident.

4. This World War II soldier to cut a 1922 Liberty dollar in half and retained his half during the war. Who was he and why was 1922 significant?

5. Vets in the Vietnam War received no notable return celebration. How were Korean War vets received?

6. This Army corporal in the Vietnam War used an unusual item on which to write a letter home. What was that item?

7. Mary Appler Moon was a WAVE, given the duty of replacing a Navy man so he could do sea duty. In an oral history, she registered a complaint. What was her concern.

9. John and Adelaide Bennett sent how many sons off to World War II.

10. What does the “Road to Remembrance” plaque bearing the name of 1st Lt. Charles DeRahm represent?

11. The exhibit bears a roster of war memorials around York County. How many are accounted for?

A2. That would be a wooden effigy of Kaiser Wilhelm, king of the enemy forces. The slogan: “Nail the Kaiser.” Residents would pay for the nails to support the war effort.

A3. Leon Gilbert, commander of a black unit in the segregated Army, received a commutation of his death sentence.

A5. There were no victory parades and little thanks for returning Korean War veterans, foreshadowing what would also happen in the next war. “In the end,” the exhibit states, “vets returned home to a war-weary nation … .”

A6. Skip Willis used a silk parachute as his “paper.”

A7. She complained that Ken Burns, in his documentary on World War II, made scarce mention of women and then only Rosie the Riveter.

A8: False: A piece of the exhibit portrays protesters at York College in 1970.

A9: Eight Bennett sons served, as well as  a daughter who put on a uniform in the Korean War.

A10: Those plaques honored those who died in uniform in World War I. They were affixed to trees along the old Lincoln Highway, now Route 462.

A11: The exhibit lists 33 memorials dotted in towns around the county.