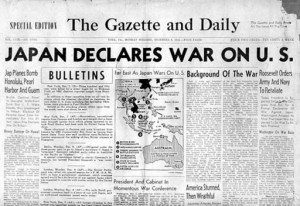 The Gazette and Daily of York, Pa., started in World War II as a broadsheet, a full-sized newspaper. It exited the war as a tab or tabloid size (see image below.) Wartime newsprint shortages prompted the change. A present-day reader is asking if the newspaper will return to its tabloid size of 1943 to 1973. Also of interest: Growing up in York County, Pa.: ‘No TV, Internet, and even no phone at that point.’ But she had her newspaper.

A newspaper reader from York recently emailed this thoughtful note:

“As a reader for many years, I would like to ask if you have ever considered downsizing your publication to be printed on tabloid-size paper? It would be easier to lay on the breakfast bars and tables as we eat and read every morning. It is hard for 2 people to read the paper simultaneously at the breakfast table! Just a suggestion!” …

I thought for a second that she was commenting on the fact that we had recently narrowed our web width, meaning the horizontal size of a newspaper page. We did that to save on newspaper costs (though by deploying unused white space on the pages, our readers did not lose any content.)

That brought me back to another moment when we changed the newspaper’s size to save newsprint. That came in the middle of World War II when newsprint was in tight supply. Her note also reminded me of a response we’ve given over the years when someone has posed that question.

Some York countians remember the days when the tabloid Gazette and Daily stood for far- left politics. The newspaper was for peace with Russia in the Cold War when hawkish views were more popular. J.W. Gitt’s Gazette and Daily was often called “red” and was unpopular in many quarters.

The York Daily Record/Sunday News, The Gazette and Daily’s successor, is far different today, seeking to be apolitical on its news pages and non-partisan on our opinion pages. So why return to a size that would fuel suspicions that we were something else?

Such Cold War memories have faded but have no plans to change to tabloid, as I outlined in my note back to our emailer:

“We’re not sure many of our readers – who are comfortable with what they’re getting today- would embrace a change of that magnitude!

“You might know that the Daily Record and its predecessor, the Gazette and Daily, was a tab from 1943 (to save paper during the war) and 1973. Unfortunately, some people remember us as a tabloid and the associated notion that we were a far left newspaper in those days – which we were.

“If we went back, some might see that as a shift back to that, which wouldn’t be popular in York County.

“That’s more of an explanation than you asked for.

“We do very much appreciate your suggestion.” 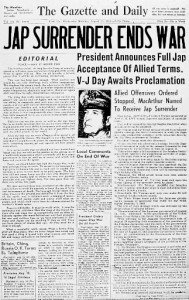