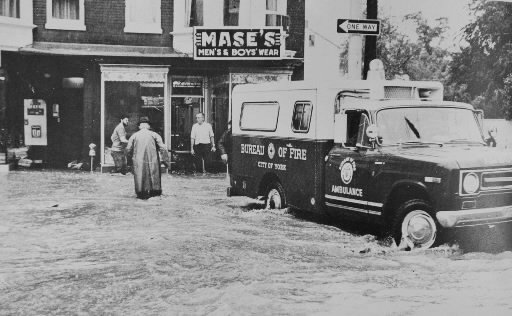 This photograph shows water on the streets of York, Pa., during Tropical Storm Agnes in June 1972. As of Thursday morning, Sept. 8, York had escaped such water levels. (See 1933 flood photo below.) Also of interest: Tropical Storm Agnes savaged York County with more than 15 inches of rain.

Is this September storm akin to what folks saw from Tropical Storm Agnes in 1972.

It would take 12 inches of rain in a day to cause that… .

And as bad as current flooding is, rainfall has totaled about 11 inches since Monday, according to the York Water Company.

Rain fell after midnight today, but here is the York Daily Record/Sunday News story on the width and depth of the storm through Wednesday evening: Tropical Storm Lee isn’t Agnes.

Also, other posts of note:

– A list of traumatic, painful incidents that rocked York County.

– Agnes in York County, by the tragic numbers.

– York County residents passed through fire and water, or water and fire, in 1822.

– What is the probability of another flood like Agnes? 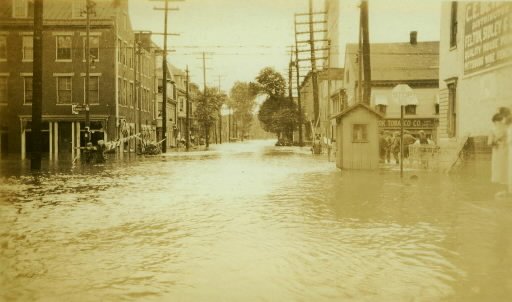 The flood of 1933 caused water to rise to these levels at the Market and Pershing Street intersection. That’s today’s Junior League thrift shop at right and the Golden Plough Tavern across the street.