Did you know these 5 things about the old York City Hall? 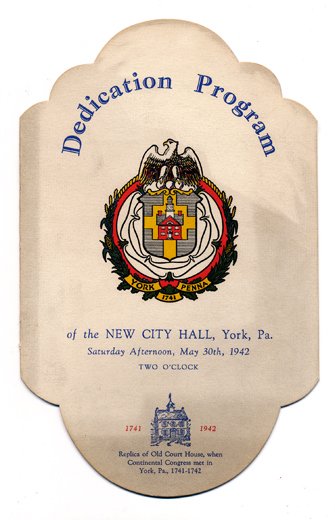 This dedication program for the new York City Hall, now the York City Police headquarters, came courtesy of the York County Heritage Trust’s Book Blast. It is filled with fun facts about the building when new. This year, although mostly forgotten, the old city hall is 70 years old. The Book Blast, by the way, ends today. Also of interest: Fill a bag at the Book Blast today for $1. Also of interest: Another Book Blast prize – An accomplished woman’s ‘Random Musings’ about 20th-century York County

Those are the ones I grab, such as the City Hall’s dedication program.

Consider these 5 things the program tells about the building, York’s police station since the city recently moved its headquarters to the old York Federal Building:

1. The building went up at the beginning of World War II on a lot that became available after a fire took down St. Paul’s Lutheran Church. “Owing to a disastrous fire, a splendid location became available … ,” Mayor Harry B. Anstine explained in an essay ‘Pertinent Facts About the New City Hall.’

2. Not surprisingly, World War II was on the minds of local officials. That was shown in a form of civil religion common before and after that terrible moment when the nation is at risk. “It is now imperilled from far and wide, but with divine guidance and the spirit exemplified by our forefathers we will again survive,” Anstine wrote in “Greetings.”

3. Construction of the new city hall commenced in 1941, coinciding with the 200th anniversary of York.

4. In their research, city officials, and architects Robert A. Stair and F.G. Dempwolf, toured other new city halls in comparable sized cities, including a swing through New England.

5. Colonial design was the architectural design of choice in honor of York’s role as a U.S. capital in 1777-78. (Interesting that the First Capital of the United States claim was not included in that description. The marketing campaign that would spawn this somewhat questionable community brand would commence about 20 years later.)

*Next post: 5 more things about the new/old York City Hall.