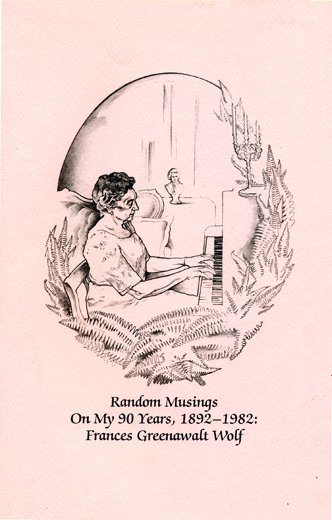 York County Heritage Trust’s Book Blast, the used book sale now under way, brought me this booklet filled with memories from Frances Greenawalt Wolf, one of York County’s leading women in the 20th century. I had never seen this booklet before, and I seek out such treasures. The story of males – businessmen, athletes, professionals – in York County history still far outweigh information of the lives and accomplishments of women from our past. So when a primary source emerges like ‘Random Musings on My 90 Years, 1892-1982,’ I grab it up. Also of interest: All yorktownsquare.com posts about women’s history from the past and Mount Wolf’s Frances G. Wolf a 20th-century mover in the York County community.

So, well, randomly, here are three such musings:

– Charles B. Wolf, her future husband, and Frances met at a party of York High upperclassman Louise Brillinger on the second floor of the Emigsville General Store. He was from Mount Wolf, of that borough’s founding family. She was from York.

“We were opposite in so many ways,” she told York College historian Charles Hatch, compiler of the musings. “He was from the county – Mount Wolf. I was from the city. He loved sports. I loved music and books. But we got together somehow, and it worked beautifully.”

Interesting, they met half-way between the county and city – in Emigsville.

– In those days, girls dated boys from one’s church or those known by their father. Charles did not qualify in either respect. Frances told her parents that the Wolfs played Flinch, a popular card game in the first half of the 20th century.

“This seemed to please mother,” she said. “Back then playing cards was viewed as bad because playing cards belongs to the devil. So Yorkers got around that by organizing “Flinch Clubs.”

Since the Wolfs and Brillingers were members of the same Flinch Club, the Wolfs were all right with the Greenawalts.

– Frances and her girlfriends wanted to learn to swim and asked the YMCA to use its pool.

“We were refused on the excuse that our wool suits would clog the drain,” she said.

So she never learned to swim. Swimming in the Susquehanna with a girlfriend one day, she almost drowned. A man in a nearby rowboat saved their lives.

“O well, I don’t think it would have mattered,” she said. “We were just girls.”

Oh yes, the savior in the rowboat? Charles Wolf.

– Frances Wolf was one of 50 women of achievement featured in the AAUW booklet “Legacies.”