About Davy Crockett in York: ‘He is the biggest fool I ever saw’ 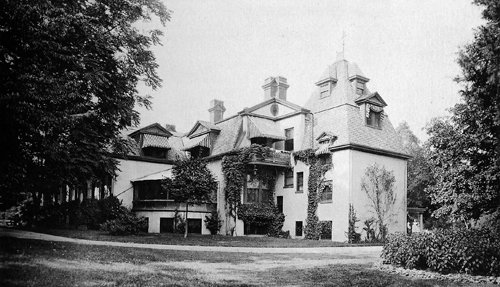 Davy Crockett and other luminaries visited Charles Barnitz’s Springdale Mansion, seen here in the 1890s, after its opening in 1828. Crockett did not impress certain members of the Barnitz household. Background posts: Exploring ornate Springdale Mansion, Imagine: 70-foot boat navigated York County’s Codorus Creek and Who were York County’s most influential citizens, Part I.

Maureen Beattie of Longmeadow, Mass., found an old letter – and part of a York County legend – at a garage sale.
She e-mailed with these details:

It is addressed to Mary M. Barnitz, c/o Herman Cope Esq., Cincinnatti, Ohio. Handwritten above the addressee is ‘free C.A. Barnitz”.
The body of the letter is in tatters, but there is one whole area that says: …

Charles Barnitz’s Springdale mansion was a high point of York social life in the 1830s.

“Last night we had dinner with Davy Crockett. He is the biggest fool I ever saw, although he sometimes does say something smart. He says, ‘People say it takes a man of sense to go to Congress. I don’t know whether I have any or not, but if I hadn’t good sense, I’ve had darned good luck… .’ ”
Imagine my surprise when I Googled “Davy Crockett and Barnitz” and came upon YOUR article (see below) which indicated that the son, David, had written the identical words.
I wonder where you might have found that information: Either son David wrote several people the identical words, or the former owners of this letter managed to detail the info and have it shared with the world.
I’ll continue to research Chas.A. Barnitz and also his daughter Mary,…it seems like there might be an “underground railroad” connection between the Barnitzs and the Copes….
Your excellent and most ambitious project of providing York information to us in cyberspace has given me some pleasure and maybe YOU some more information to share…

This often-told anecdote about Davy Crockett is part of York County Heritage Trust files. Comment below if you have more information.
Meanwhile, here is the article Maureen referenced, which provides a glimpse about Barnitz, an early 19th-century York shaker and mover:

Charles A. Barnitz, York’s leading lawyer, delivers a major address in York’s Centre Square on July 4, 1826, as part of a major celebration of America’s independence. About 50 Revolutionary War veterans sit before him.
“Fifty years have rolled onward the prosperous destinies of our country, since her illustrious patriots, in the most devoted and solemn manner, offer themselves a sacrifice on the altar of our liberties; declare it were better to die freemen than to live slaves,” Barnitz said.
Lewis Miller, folk artist, draws the scene and writes: “All the old 76. What was left of them in town and county. Appeared before the old courthouse.” Barnitz’s legal and political success pays for an estate called Springdale.
Barnitz and his wife, Margaret, play host to many luminaries. Barnitz, who represented the Penn heirs in Springettsbury Manor, probably meets statesmen Henry Clay and Daniel Webster in arguing a lawsuit involving the Penns before Chief Justice John Marshall.
Clay, Webster and Davy Crockett head the list of luminaries visiting Springdale. Barnitz meets Crockett when representing the county in Congress from 1833-35.
Crockett does not impress Barnitz’s son, David, who wrote, “He is the biggest fool I ever saw, although he sometimes does say something smart. He says, ‘People say it takes a man of sense to go to Congress. I don’t know whether I have any or not, but if I hadn’t good sense, I’ve had darned good luck.'”
The mansion stood on South George Street until the 1950s, lending its name to that section of York. Today, Springdale’s renovated carriage house serves as a meeting place for York’s Universalist/Unitarian Society, and a new building is under construction in late 1998.