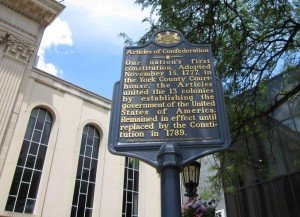 This marker celebrating the adoption of the Articles of Confederation in York was dedicated on Dec. 19, 2001. The marker was installed in Continental Square as part of the Nine Months in York Town celebration in 2001-2002, marking the 225th anniversary of the Continental Congress’ completion of work on this foundational document. The Articles  of Confederation is being remembered as students work on a Student Media Contest.  Also of interest: Continental Congress struggled into York, and delegates strutted back to Philly 9 months later.

“Deadline is Oct. 26 for our Student Media Contest. If you are a techie who loves history, this is the contest for you!http://www.yorkheritage.org/page.asp?id=79.”

The following exchange with an elementary school teacher might provide instruction and insight about resources available to assemble contest entries (I won’t give his name because this is a contest):

“While trying to gather resources for my students to use, I came across the attached document online (http://extras.mnginteractive.com/live/media/site515/2010/0517/20100517_075509_NineMonths.pdf).  I was wondering if my students would possibly be able to use some of the information/ images as part of our project.  If you are unable to grant such permission, I would appreciate if you could provide me with the contact information of somebody who could.

“Also, we are looking for someone to interview with knowledge of what life was like in York during the Second Continental Congress.  I was wondering if you would be interested in participating in a Skype session with students in my class.  You would be more than welcome to come to our classroom … .”

That teacher is thinking!

I wrote back that it’s gratifying that the month-by-month calendar he was referencing was being used. It was a product of the Nine Months in York Town celebration in 2001-2002. I granted him permission to use it, but if he was using individual photographs, he would have to go to the Heritage Trust for permission.

I also referred him to the Heritage Trust as a possible source of speakers about the American Revolution.

I queried him about whether he has my book “Nine Months in York Town”  in his school library. It contains stories about life in the York when Continental Congress was meeting here. As part of the celebration, copies were donated to all school libraries in York, Adams and Franklin counties. (He checked and it wasn’t there. So I sent him a gratis copy, an invitation I extend here to other area teachers, if the book is no longer in their school libraries.The book is also available for purchase at the Heritage Trust’s bookshop.)

I also shared some other resources with him, which I’ve supplemented since:

– This video, prepared by Central York High School history students, highlights the Murals of York that address the American Revolution.

We’ll see how the teacher’s class does in this competition. They’re certainly doing their homework.