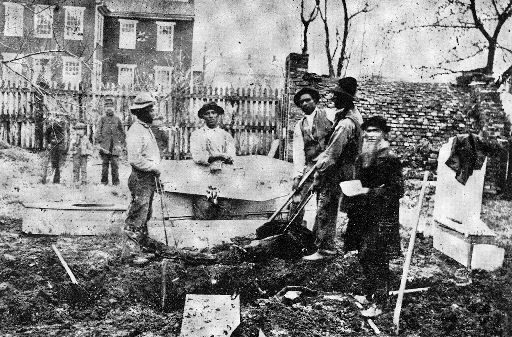 P.S. Weaver, a Hanover, Pa., photographer, captured this scene of the exhumation of the bodies of Union solders who died in the Battle of Hanover. This scene comes from the German Reformed Church’s cemetery. Also of interest: Hanover Civil War story stop: ‘Mother Loses Two Sons to War’.

The act of exhuming bodies happens in York County. We know that because of the well-covered recent exhumation at the Keeney Cemetery in southern York County.

Not often, but they happen, often in the quest for evidence in criminal court cases. (More about that in a later post).

The best-known exhumation in history became such because of the preservation of the well-known photo above.

The bodies of Union soldiers who fell at the Battle of Hanover were re-interred in the National Cemetery in Gettysburg, the burial site that President Abraham Lincoln helped dedicate by delivering his Gettysburg Address on Nov. 19, 1863.

This photo popularly appeared in “Prelude to Gettysburg: Encounter at Hanover,” published just before the 100th anniversary of the battle by the Hanover Chamber of Commerce in 1962.

Here’s a summary from my “East of Gettysburg,” using “Encounter” as a source:

“Sometime after the battle, workers disinterred the bodies of Union soldiers killed in the Battle of Hanover and moved them to the National Cemetery at Gettysburg.

“Townspeople initially moved the bodies to a makeshift morgue in the Flickinger Foundry on York Street. Henry Wirt, a prominent Hanover resident, directed the making of caskets, and the Rev. William K. Zieber officiated at the service.”

Another Union re-burial took place as comrades later moved the body of a Union artillerist from the Lutheran Cemetery in Abbottstown to nearby Paradise Catholic Cemetery.

According to “East,” One count placed the Union dead in the battle at 19. In addition, 73 were wounded and 123 were missing. The Confederate count came at nine. Fifty were wounded and 58 missing.

So, there is some accounting for the temporary burial of Union dead. The documentation for the Confederate dead is sketchy. One of the dead was buried by his comrades, according to ‘Encounter.’

Perhaps Civil War aficionados can help place other real or reported Confederate burial sites for those who died the Battle of Hanover.

Jubal Early heard booming of Battle of Hanover’s guns
It’s just a ditch in Hanover, Pa., but Jeb Stuart made it famous