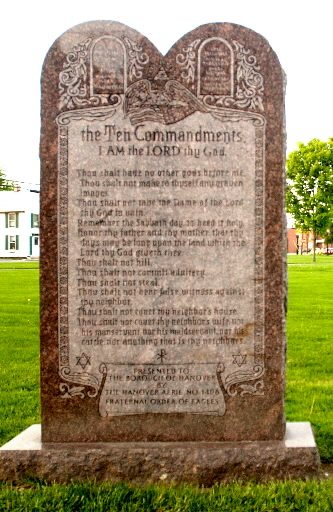 This 6-foot-high Ten Commandments monument has stood in Hanover’s Wirt Park since the 1950s. In 2003, the marker was challenged in court. The matter was resolved when a non-profit group purchased a 15-foot plot. It is one of several First Amendment cases in York County in the past 50 years. For more on the market and Wirt Park, visit: Marker explains Hanover’s Ten Commandments monument. Background post: A refresher on Dover ID case and For years, York countians part of major court cases and Witman murder among York County’s most notorious crimes.

Albert Snyder’s federal lawsuit against the Westboro Baptist Church covered such issues as privacy, freedom of speech, freedom of religion and the right to assemble. That all stemmed from the religious group’s picketing the funeral of Albert Snyder’s son, Lance Cpl. Matthew Snyder, the Marine who was killed in Iraq in March 2006.
It is one of many high-profile court cases in York County or involving county residents in the past 50 years that explored First Amendment issues, particularly the freedom of religion clause… . 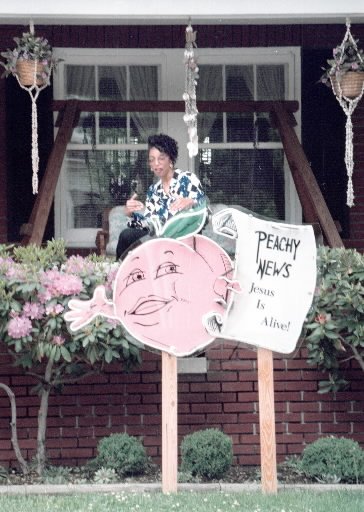 Sybil Peachlum’s sign kept the city woman in court for 10 years before federal judge ruled Peachlum had a constitutional right to display the sign in the front yard of her Jackson Street home. During the court battle, Peachlum lost her home to foreclosure.
In the Snyder case, a jury recently returned a $10.9 million judgment against the Rev. Fred Phelps and the church. Jurors found that the church violated York County resident Albert Snyder’s privacy and intentionally caused emotional distress when it staged a protest outside his son’s funeral. (Update: On March 2, the Supreme Court ruled 8-1 against Albert Snyder.)

A sampling of othe noteworthy cases, based on York Daily Record reports:
– The Fraternal Order of Eagles gave Hanover a pink granite monument bearing the Ten Commandments in 1957. In 2003, Americans United for the Separation of Church and State threatened to sue if Hanover did not move the monument out of Wirt Park. With a county judge’s blessing, the Hanover council sold the plot around the monument to Gitt-Moul Historic Properties, a private nonprofit group.
– Loganville pastor Jim Grove has been in court over entering gory, anti-abortion floats in York’s Halloween parade.
– After the Dover Area School Board added a mention of intelligent design in its ninth-grade biology curriculum, Judge John E. Jones III ruled in December 2005 that the concept is not science and unconstitutionally established religion in a public school science class.
– York resident Sybil Peachlum fought for a decade over a sign in her Jackson Street front yard that said, “Peachy News Jesus Is Alive!” A U.S. Middle District Court judge ruled in December 2003 that York’s sign ordinance was unconstitutionally applied in Peachlum’s case.
Perhaps the most influential case legally came in 1969 when the FCC and a local Christian radio station squared off over jurisdiction of the airwaves. “Never to be Forgotten,” described it this way:

Tiny Red Lion Broadcasting Co. and its Christian radio station, WGCB, become involved in a landmark U.S. Supreme Court decision. The radio station ran a 15-minute broadcast in 1964 during which Oklahoma evangelist Billy James Hargis attacked a book critical of recently defeated Republican presidential candidate Barry Goldwater. Fred J. Cook, author of “Goldwater: Extremist on the Right,” requested free rebuttal time under the Federal Communications Commission’s “personal attack” rule. WGCB and about 200 other stations that had run the Hargis broadcast received the request. WGCB refused, and the case went before the Supreme Court in 1969. The court finds in favor of Cook. Justice Byron White wrote that the First Amendment does not protect broadcasters’ desire to use their allotted frequencies continuously to broadcast whatever they choose and to exclude views they oppose from using that frequency. The government can order opposing views because of the so-called scarcity rule. A finite number of available radio frequencies exist. Only so many broadcast stations can operate without interfering with each other. Thus, the FCC declares jurisdiction over the airwaves.