York Lt. about A-bomb: ‘We must guard its secret wisely’ 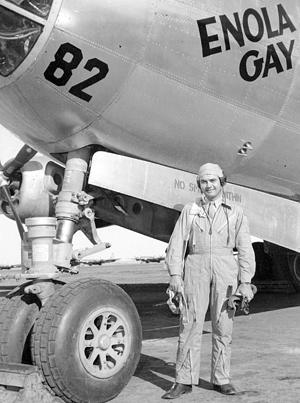 Col. Paul W. Tibbets, with the B-29 Superfortress bomber the Enola Gay, the plane he piloted in dropping the atomic bomb on Hiroshima on during World War II. Tibbets, who had named the plane after his mother, died recently in Columbus, Ohio. Background post: Publishing legend Gitt vocal about nuclear power.
York countians helped with parts of the Manhattan Project. And at least one York countian saw the destruction wreaked by the second bomb, the one that hit Nagasaki.
Lt. Paul Hyde, a York Corporation employee, was navigating a Coast Guard-manned landing craft that was greeted with a tench as his craft moored in Nagasaki’s harbor….

The rest from “In the thick of the fight”….

The smell, the type that would make people lose their appetite, came from the scene of the bombing, four miles away.
He observed the point of impact, a field of devastation. A series of brick smokestacks stood among the ruins.
It was not difficult to understand, he wrote, why no humans came out of those ruins alive.
The bomb’s impact opened his eyes about its power.
“We must guard its secret wisely,” he wrote his parents, Mr. and Mrs. Paul Hyde of York, “and make a real effort toward world peace everlasting.”