Who is Bob Kinsley, builder of the new Gettysburg Visitors Center? 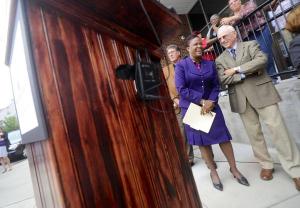 Several years ago, prominent York businessman John Schmidt told me at least one reason for builder Bob Kinsley’s success.
“He just gets up a little earlier than the rest of us,” Schmidt said.
That goes a bit in providing insight to the man behind the question:
Who is Bob Kinsley, the “private” side of the private-public venture that has constructed the new Gettysburg Visitors Center and Museum? … .

A long profile, appearing in the York Daily Record in 1998, provides the most detailed public piece on this prominent regional builder:
Building on success
Kinsley’s Charge
He started 40 years ago with a pickup and a tractor. Today, he’s playing to a national audience with his Gettysburg plan.

Anne and Bob Kinsley were awarded the Cornerstone Award by Lutheran Social Services in 2005.