When Santa visited York in nights of Christmases past 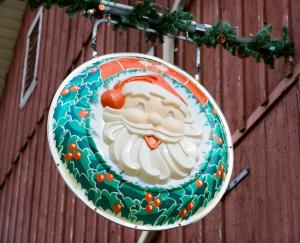 This medallion is an example of how York City decorated up decades ago for the Christmas season. It hangs today outside Leon Ness Jewelry Barn in York Township. (See video and photographs below of York in the Christmas season.) Also of interest: Strathmeyer Christmas Tree empire began with small York stands and now sells all over East.

Ydr.com’s ‘Remember’ series brings back all kinds of memories about York County’s past.

Some are tied to significant events – the Cuban Missile Crisis – and others link in with just nice moments – the Christmas shopping season in York.

A highlight of this month’s ‘Remember’ story is a list from York’s David Nicklow, The Bon-Ton’s retired former display shop manager. (Jennifer McGee compiled and submitted these memories.)

2. Mr. and Mrs. Claus compiling the list of who was naughty or nice

3. The German Band — We made a spoof of this band.

4. Rudolph’s Barn and Stable — Background of the barn was made by various members of the Visual Shop to represent all the reindeer.

6. Santa Breakfast in the old Bon-Ton Tea Room and “Meet Me at the Bon-Ton” buttons

8. Santa float — Made by Visual Associates. The night before the parade, employees would meet at Edgecomb Steel around 6 p.m. They would use one of the Edgecomb trucks and drivers to make the float for the Santa Parade consisting of a sleigh, eight reindeer and Rudolph. Employees would usually work until around midnight.

9. Santa Parade — Santa would arrive at the York Airport. He would then transfer by fire truck to the parade holding area. It was not Christmas until Santa arrived at The Bon-Ton and (proceeded) to (ascend) the fire truck ladder to the third floor of the downtown Bon-Ton building. He would then make his way to the Santa Castle somewhere located inside The Bon-Ton. During that time, The Bon-Ton display windows would be open to the public for viewing. New mechanical figures were often used to make Christmas come to life.

10. When The Bon-Ton moved to the York Mall, the traditional mechanical figures were transferred to the mall conference room. The steps to the conference room were made to look like steps to a castle. The room itself was made to look like an enchanted forest with a swinging gnome and a walk-through Christmas Tree trunk. After passing through the tree, you were greeted by an animal forest consisting of bears, deer, rabbits, etc. Afterward, you would make your way into Santa’s Castle, where you could have your picture made.